The Really Abominable Snowman - a bookwrap 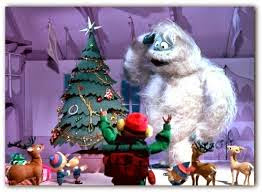 What does abdominal mean? 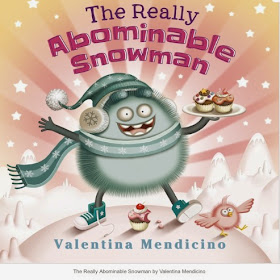 I would like you to meet Milo.  That is the name his mother gave to him.  Legend has it that high in the Himalayas, lives a very stinky, hairy, child-eating abominable snowman...but that's not Milo... no way!  This little guy smells of luscious lavender, has a sweet disposition and even bakes cherry cupcakes.

Milo's problem is that he is very, very lonely and wants so badly to have a friend.  He tries getting a make-over ... no, that won't do the trick.  He decides to try tweeting, and even puts his face in a book to attract friends but ... no, social media isn't the way to go.  Then he discovers a meet-up group called "The Society of Misunderstood Creatures."  Could this be the answer to his friend dilemma?  It's worth a try, so Milo bravely signs up hoping for the best.

He yearns, he longs, he hurts so inside ... being alone is not fun at all.  Will this group be the answer he is searching for and produce a playmate for him?  Will he find someone that likes him for who he is, befriend him, and see his true value and worth?

You certainly feel for Milo.  You find yourself cheering him on in his pursuit of a BFF.  He is portrayed as such an adorable and loving little guy both on the inside and the outside.  The illustrations are done in pale, subtle colours and perfectly convey Milo's feelings and emotions.  Although a bit quirky (which I love) the digitally rendered visuals pay great attention to detail bringing the reader back again and again to enjoy this heart-warming story. I highly recommend it.

Unwrapping the book to take a peek inside... 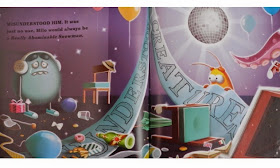 Poor Milo... he needs a friend!  Any takers? Being yourself is always the best.... 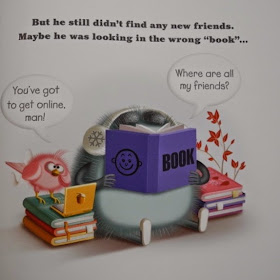 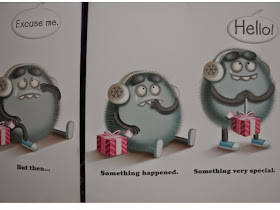 Is there hope for him?  Any takers?  Anyone else that loves cherry cupcakes ?

Let's dig deeper and pull out the author/illustrator ... 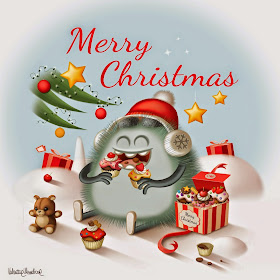 Valentina  Mendicino is an Italian illustrator based in London, United Kingdom.  She spends her life drawing.  But she also loves games, animations, music, food, to dream, travel, and love...and also loves cats.  What else does she want to do?  She would like to visit the planet Zorg!


This book has just been picked up by The Guardian and named the Best Picture Book for Christmas 2014.