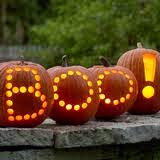 Quote of the Day: "My imagination doesn't require anything more of a book than to provide a framework within which it can wander."
~Alphonse Daudet 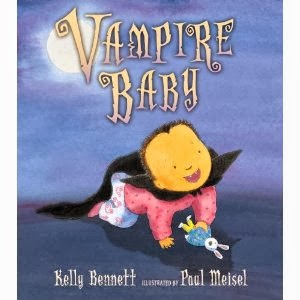 Big brother is the narrator of this adorable, sweet story and makes quite an accusation concerning his baby sister.  Don't get me wrong, he loves his little sister, Tootie, but all that instantly changes.  You see Tootie magically, overnight, grows a pair of extended canines that look exactly like Vampire fangs.  But are they really?

Big brother tries to convince his family that she really is a vampire, after all she bites her fangs into everything: the furniture, her favourite toys, and especially into him!  He shouts out, "Youch, Tootie!  No bite!" quite often.  Mom has many excuses why Tootie is in the baby-phase of biting and explains, "She's hungry that's why Tootie won't sleep at night." "And take off that garlic necklace."  But big brother is not convinced. Why just look at her hairline, her favourite foods are bloodred, and she doesn't sleep at night because Vampires don't sleep at night!  Tootie went from adorable to deplorable in his eyes, overnight. On shopping day big brother puts Tootie in a cape and gives her a sign that says, "Wanted good home for Vampire Baby."  Low and behold, on aisle 13 in that supermarket, a real Vampire family arises and offers to take the Vampire Baby "homey-womey."  But when their boy shouts at Tootie for chomping his nose, her big brother comes to her rescue and decides to keep his baby sister after all.   He discovers she is not so bad after all and is a keeper.

The illustrations are simple pen-and-ink and watercolour.  They are cartoonish and really drive the story home.  Personally, I loved them.  This story is a great way to teach kids about loving younger siblings in the family and also gives you, the parent,  a chance to teach about "no biting" if that is a problem in your family.   Perfect for gift giving and especially now you can tie it in with the Halloween which will be arriving soon. 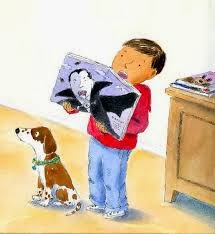 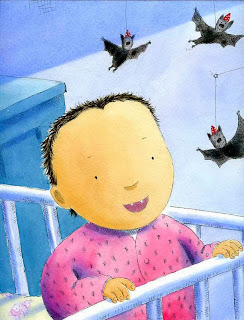 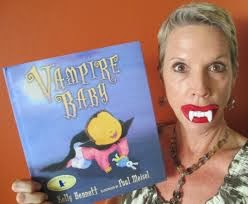 My journey to become a children's book author began behind the wheel of a 1979 Cadillac Coupe de Ville with a sagging ceiling liner and an enormous band-aide glued over a dent on the rear driver's side. That car was big, green and ugly. My 4-year-old son, Max, sat on his kiddie booster in the backseat; my 2-year-old daughter, Alexis, rode beside me in the front. We drove that Caddie from Oklahoma to California and back again with no radio and no air conditioning-all we had were songs, stories, and each other. On that long, dusty trip I learned I could make up one whopper of a story. I also decided that I wanted to keep making up stories, and I wanted those stories to become books. Eventually I graduated from Vermont College's M.F.A. program in Writing for Children and Young Adults.
About My Work
In the more than 20 years since that fateful car ride, my stories have appeared in newspapers, magazines, and more than 12 books for children-both non-fiction and fiction. My children, Max and Lexi, still enjoy hearing my stories.
I'm a list maker--always have been. As soon as I learned to write, I started making lists: Birthday Lists; Christmas Lists; To Do Lists; Things to do on Vacation; Stuff to Remember to Tell My Best Friend; Why I Hate fill in the blank; All The Reasons I Love fill in the blank. Right now I have a list of titles called Books I'm Going to Write One Day. Many of my stories start as lists. NOT NORMAN, A GOLDFISH STORY began as a list of all the things a good pet should be. That turned into a list of reasons why a goldfish is a good pet. DAD AND POP, my forthcoming picture book, about a girl who has two fathers, is what many call a "list story." "If I am writing a story and get stuck, or can't figure out what happens next, I get busy making lists.
And so it seems fitting to end with a list. Here are 10 TRUTHS AND A LIE: THINGS YOU DON'T KNOW ABOUT ME:
1. My favorite snack is chocolate in one hand, potato chips in the other.
2. I grew up in California, near the beach.
3. I have visited all 50 of the United States, 15 Countries, and 4 Continents-so far!
4. I wear a retainer to bed every night.
5. I have ridden elephants, camels, and a dolphin.
6. I have eaten ants, crickets, snakes, alligator, frogs, and sago palm larvae.
7. Norman the goldfish is named after my cat.
8. Kelly is not really my name.
9. I live part time in Texas and the rest of the time in Jakarta, Indonesia with my husband, Curtis.
10. I once raced a SCCA Sports Renault.
11. I never travel anywhere without my pillow.
Can you guess which one is the lie?

A much more flattering picture of the author: 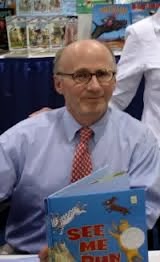 I live and work in Newtown, Connecticut, where my wife and I raised our three sons.
With me in the studio is Coco, our energetic labradoodle. SEE ME RUN, which won a 2012 ALSC Theodor Seuss Geisel Honor, was inspired by Coco's habit at the local dog park of getting other dogs to chase her. Few can catch her. When not sleeping, Coco spends her time digging up the lawn or chasing the deer and squirrels out of the yard. She also served as inspiration for the sequel, SEE ME DIG.
I received a BA from Wesleyan University, where I was a fine art major. While at Wesleyan I did a lot of painting, drawing and printmaking. I spent my Junior year at the Tyler School of Art in Rome. I went on to receive an MFA in graphic design from Yale University.
After Yale, my wife, Cheryl, and I moved to New York City, where I worked briefly as a graphic designer and then started my illustration career, working mostly in the editorial field. I did a lot of work for the New York Times, the Boston Globe, the Harvard Business Review and a number of other publications. I also did some advertising work, as well as some commercial animation work. To date I have illustrated more than 70 books, including early readers, picture books, eight books in the HarperCollins Let's-Read-And-Find-Out series, and many mass market books. I am the author/illustrator of three books (so far!).
When not in the studio I can be found in the yard gardening, mowing, throwing a ball for Coco or running around a tennis or squash court.

Read on and read always!   Have a super day everyone!

Biting is part of almost every little kid's life...either he puts his fangs to someone else or someone sinks her teeth into him.  How to handle both:

When your child is the biter

* Get eye to eye with the nipper.  Then, using a stern voice, say, "No. We don't bite."  Babies as young as 9 months can understand that, and given that they usually bite because they're teething, a gentle but firm, no, typically suffices.  Older babies and toddlers tend to chomp out of frustration or anger and require further action.  Keep reading!

* Immediately remove the biter for a mini--time out, which will help defuse the intense feelings. For most toddlers, even a 30 - second break will feel like an eternity.

* Once he's calmer, have him tell the other child "Sorry."  Not talking yet?  A gentle pat will do.  The goal is to introduce the idea of empathy, says David Schonfield, M.D., director of developmental pediatrics at Cincinnati Children's Hospital.

* If the child continues to bite a lot going forward, praise him whenever you see him not doing it during a similar situation.  You can say something like- "Jason, I'm proud of you for asking Sally nicely to share your toy."  Should the habit continue beyond age 2 or after several weeks of positive reinforcement for not biting, check in with your pediatrician.

When your kid's the bite:

* Wash the bite with soap and water right away, even if the skin's not broken.  If there's even a little bleeding, apply antibiotics, ointment and cover with a bandage.  Actual deep puncture wound?  Call the doctor; she may prescribe an antibiotic.

* Keep an eye out for signs of infection, such as redness or swelling at the bite site, or a fever.

Posted by Storywraps at 9:31 AM