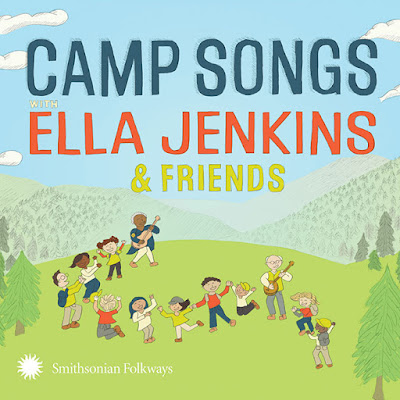 (this song is not included on the album but gives you a flavour of Ella's magical, musical touch with kids)

Ella Jenkins, The First Lady of Children's Music, celebrates 60 years as a Smithsonian Folkways artist with the release of "Camp Songs with Ella Jenkins and Friends."  She assembled a group of children, parents, and teachers from the Old Town School of Folk Music in Chicago, along with Tony and Kate Seeger from Camp Killooleet, to sing these rounds, nonsense songs and campfire favourites.  This 25-track collection will quickly become your child's favourite songs too.  They include "Michael Row the Boat Ashore", "Kumbaya" and "This Land Is Your Land",  just to name a few.

These selections come from a variety of traditions, among them African-American spirituals, European folk songs, and Jewish summer camps where Jenkins performed.

The album is produced by Tony Seeger, nephew of folk-music icon Pete Seeger. Tony Seeger also wrote the included liner notes and lyric annotations for all the songs in the 36-page booklet that accompanies the album.

A bio about Ella Jenkins

Ella draws on her experiences growing up on the south side of Chicago and says, “I was raised with respect for my elders and teachers, which helped me throughout my life.” Her Uncle Flood played the harmonica and was her introduction into music. She also had many musical influences just outside her home. Gospel music and the sound of tambourines were often heard from the loudspeakers of churches across the street. Ella’s family relocated frequently, trying to move “uptown” from their neighborhood. Rhythms, rhymes, and games were different in each new neighborhood. Ella began to create songs for children while volunteering at a Chicago recreation center and subsequent education-oriented jobs. Through her work, she gained an understanding of children from various backgrounds, and today continues to learn a great deal from children.

Her music transcends language and cultural barriers. Ella shares with children of one culture what she’s learned from children of other cultures. She has gained knowledge and inspiration by performing and working with children on seven continents for four decades. She encourages active participation using music from diverse cultures. With her ukulele, usually a harmonica, sometimes a guitar, occasionally a piano, and many small percussion instruments (a kaluba drum, keyboard imitating steel drums, guiro, maracas, a tambourine...) she takes listeners on a multilingual, multicultural journey—teaching the art of communication through music.

She released her first album for Folkways in 1957, and her 1966 album "You Sing a Song and I'll Sing a Song" remains one of the best-selling titles in the history of Smithsonian Folkways.  She received a Lifetime Achievement GRAMMY Award from the Recording Academy in 2004.  Ella turns 93 in August and is still going strong.

Down by the Riverside

This Land is Your Land

Down in the Valley

One Bottle of Pop

Sipping Cider through a Straw

To Stop the Train

The Court of King Caractacus

This Little Light of Mind

This is a perfect collection for all year round music magic and participation for the whole family.  I highly recommend this album!!!

Posted by Storywraps at 8:35 AM

" The Truth About Dinosaurs" - a bookwrap 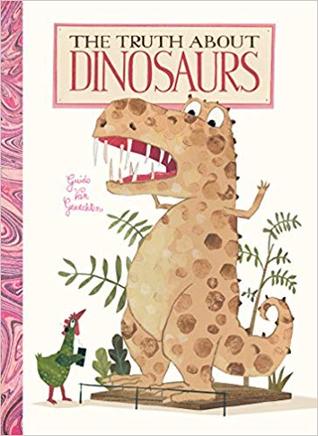