The Hallo-wiener - a book review 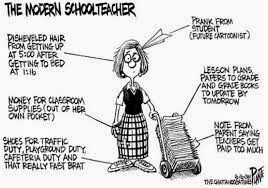 "I'm so happy that Hallowe'en falls on a Wednesday this year!" said NO teacher ever.
-author unknown 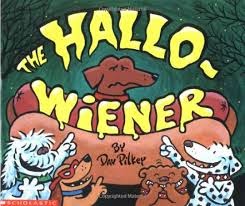 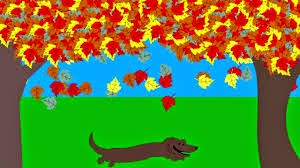 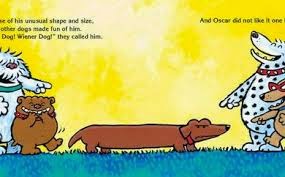 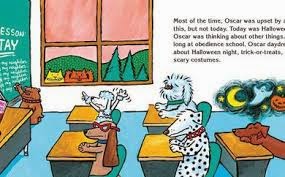 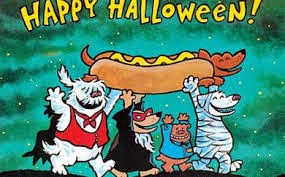 All about this book:

This book was published September 1, 1995.  It centres around an adorable little dachshund named Oscar, named after Oscar Mayer.  Because he is short and different from the other dogs in his neighbourhood he becomes the brunt of teasing and jokes. Even his mother adds to his misery by calling him her, "Vienna sausage."

He knows that Hallowe'en is fast approaching and he dreams of wearing a scary, empowering costume out trick or treating with the rest of the pack. Alas it is not to be.  When he arrives home his mom has taken it upon herself to get him his costume and when Oscar sees it, he is mortified!  It is "a giant hotdog bun complete with mustard," and guess who is the wiener?  Oh my.

Not wanting to hurt his mom's feelings, obedient little Oscar wears the costume causing more mockery to himself.  The other dogs can run fast to collect their loot but poor Oscar is inhibited by his short legs and binding costume, so when he arrives at the neighbour's door for treats, they are all gone.

His friends get into a dangerous predicament as a huge, ominous creature rises out of the darkness and forces them to run wildly and jump into the lake for safety.  Oscar saves the day by disclosing the culprits and rescuing his friends from their peril.  How is he rewarded?  Well let's say he receives hero status and loads and loads of candy from his now very grateful friends.

The illustrations are vibrant, cartoonish and fun.  I highly recommend this book for your Hallowe'en collection. 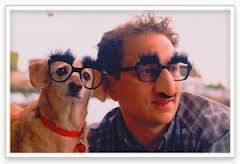 David Pilkey, who is also known by the pen name, Sue Denim was born on 4th March, 1966 is a very famous and renowned American writer and illustrator of children’s literature. He is most popular for being both the author and illustrator of the Captain Underpants book series. He occasionally also uses the pen names of George Beard and Harold Hutchins. Pilkey resides with his wife, Sayuri near Seattle, Washington.
His father’s name was David Pilkey and mother’s name was Barbara. He also has one older sister whose name is Cindy. While Pilkey was in elementary school in Elyria, Ohio, he was diagnosed with and suffers from dyslexia and attention deficit hyperactivity disorder. He was therefore chided for his behaviour in school several times and consequently took to sitting at a desk in the school hall, where he fantasized and created the character of Captain Underpants. Pilkey gave his book, World War Won for entry in a national competition for student authors and won the prize in his age bracket. As a result of the award, the book was published in 1987.
The peculiar spelling of his name came when he was employed briefly at Pizza Hut, when the “e” was removed from his nametag. Although, it is spelled as Dav; it is still pronounced as Dave.
When he relocated to Washington, he met Sayuri, a professional musician and also the owner of his favourite Japanese restaurant. They started dating in February of 2005 and got married in a private ceremony later that year.

Read on and read always!  Happy day everyone.
Posted by Storywraps at 8:22 AM