It's an info sharing day today

"The best and most beautiful things in the world cannot be seen or even touched - they must be felt with the heart."

I am thinking of opening up a new space on Storywraps once or perhaps twice a month for adult books.  Adults are for your information, just grown-up kids, and I know they are very passionate about good books too.  Please stay tuned as I unfold and launch this special place on a Saturday for your enjoyment.  Every adult on the planet is invited and it will be a fun place to land for sure.  If you could help me get the word out to family and friends I would so appreciate it.  Here is a taste of what's in store for you today..... 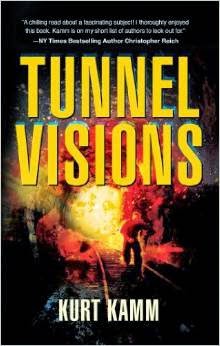 Tunnel Visions is a work of faction a blend of fact and fiction. It weaves together the historical details of an actual water tunnel disaster in Los Angeles, the current struggle for control over California's diminishing water supply, and a fictional plot to attack the Los Angeles water system. Digging 5 miles inside a Los Angeles MWD water tunnel in 1971, Willie Carter was one of the 17 men killed by a methane explosion in what became known as the Sylmar Tunnel disaster. Nick Carter, Willie Carter's son, is a firefighter trained in urban search and rescue (USAR) operations. His fiancée, Cindi, is an ATF Special Agent. On a Sunday in 2014, they are swept up in a massive Homeland Security response to a terror alert in Los Angeles. At the end of Tunnel Visions, when Nick makes a desperate entry into the gas-filled Sylmar Tunnel in an attempt to save Cindi and prevent a disaster, his past and present are brought together in a shocking way.

First responders and the hazards they face and deter are at the heart of the fact-based mystery
novels of Malibu, California author, Kurt Kamm.

A graduate of Brown University swordfisand Columbia Law School, Kurt had a successful career as a financial executive and CEO before immersing himself in the world of the first responders who feature so prominently in his books.  After attending the El Camino Fire Academy and training in wildland firefighting, arson investigation, and hazardous materials response, Kurt also became a graduate of the ATF Citizen’s Academy and has ridden along with the Los Angeles County Fire Department’s famed Urban Search & Rescue Task Force.  Along with this, Kurt has has used his contacts with CalFire, Los Angeles and Ventura County Fire Departments, and the ATF to enhance the research which vests his novels with a realism that puts his readers on the ground with his characters.

I have always enjoyed writing and won a short story prize in high school. When I was at Brown, I took a career guidance test and was advised to become a writer. Even in those young, naive days, I knew I couldn’t earn enough money as a writer and decided to go to law school and on to Wall Street. I look at writing as a final reward for working hard at other things for most of my life

Every lawyer has to learn how to write, if not in the most interesting way. Right brain-left brain. I was never very good at math, but I was a terrific reader and had a good imagination. My business partner couldn’t write two sentences but was brilliant at numbers. We made a great pair.

I retired, was recently divorced, and moved out to Malibu. One day I woke up and had NOTHING to do. A friend from the LA Times convinced me to start writing classes. We were encouraged to keep a journal, and write something, anything, every day. That’s how I got started. I really enjoyed it and thought, this is something I can do.

A lot of research. I just read about an author who wrote an entire series of novels about India without ever having even been there. That’s inconceivable to me. I have to be out in the field, smelling, touching, checking out the colors and textures and, most important, listening to the people around me. I have spent hundreds of hours with the men from LA County Fire Department in training situations and at actual incidents. I’ve never had so much fun in my life and have opened a window into a part of life that was unknown to me when I worked in the financial world. I use those experiences as the backgrounds for my novels. I could never dream that stuff up.

I do all the research myself. I’m not sharing the fun with anyone!

Non-fiction is boring. I want to create factual backgrounds and then insert unique characters: identical twins who are terrorists, albinos obsessed with tattoos and rare blood, and weather broadcasters fixated on fires.

The idea for Tunnel Visions came from an actual event, a disastrous gas explosion in a water tunnel which killed 17 men. Once I adopted that as the background for the novel, the whole issue of California’s water shortage became part of the story.

It’s hard to reverse a water shortage unless you are God. Conservation will help. The rain/drought cycles may be decades long. The western United States had a 50 year wet cycle up to end of the 20th Century, so everyone adjusted their expectations and water usage upward. Now we’re in a drought cycle and it’s hard to know how long it will last.

Character drives the novel.  I love to imagine people who are slightly, or significantly, off center. Isn’t everyone a little weird?  The personality issues create the plot.

I refuse to admit my age. Who wants to read something written by an old guy about an old character who’s been there and done that? I like to write about young characters who are intrepid and enthusiastic but don’t have enough life-experience to avoid making mistakes. Actually, it’s easy to create these young characters, and I love ‘em all! Now excuse me, I have to take my mid-morning nap.

I do know a woman who is a special agent for the ATF, and she gave me some insight into her life in law enforcement. She is attractive, feminine, and tough as nails. I almost fell off my chair when she told me that she worked undercover for two years in an outlaw motorcycle gang in Wichita. (“Winter on a bike sucks.”)  I like including strong female characters - I guess it brings out my feminine side.

First, I hope they simply enjoy the experience of reading my novels and find my characters interesting, lovable, or reprehensible. I would also hope they get some insight into the skill and dedication of the first responders who make everyone else’s life safer and easier.

How about the worst advice? The worst advice was, “Write what you know.” If you do that, you might not ever write anything interesting. Get away from your computer. Get yourself into something you know nothing about, and learn something new. Then go back and write about that.

When I was a master’s bicycle racer, I spent hours, training by myself and trashing my body. Then, on race days, I got up at 4 AM, drove two hours to a 7 AM race start, busted my gut for 2 hours, and sometimes ended up on the podium. And guess what? Almost no one was around and almost no one cared. Sometimes I asked myself, “Why am I doing this?” The answer was, because I loved it. The same applies to writing. You may spend hours working hard to create something no one notices or cares about, so you had better enjoy the process, because that may be all the reward you get. There are no guarantees. That said, if you do love what you are doing, don’t ever give up.

Kurt Kamm is an award-winning novelist of fact-based fiction.  His latest thriller, Tunnel Visions, is on shelves now.  You can read more from Kurt on Huffington Post or Facebook.  To read interviews conducted by Kurt with some of your favorite best-selling authors, visit www.KurtKamm.com.

This will be a fun, interesting and inspiring place to land Mr. and Mr. Grown-up.  Bring a drink of your choice and browse the books I feature and please enjoy your book experience.  Happy reading everyone..


Whether you are big or small,
Storywraps will have it all!

(yes, yes I know that's bad but hey, it was from the heart)

Read on and read always.

Posted by Storywraps at 9:23 AM