Meet Steve Smallman, the author of today's book. Although this is  one of his earlier books you will get a flavour of this talented author touting his amazing creativity and wit as he reads aloud to his listeners. 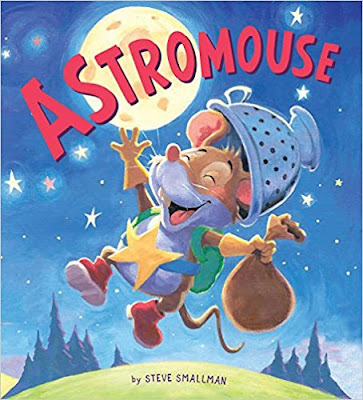 Unwrapping some magnificent illustrations for you to enjoy 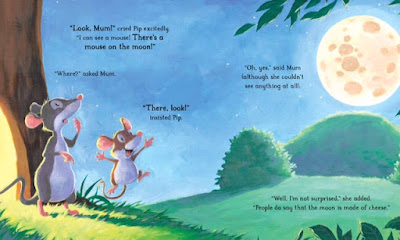 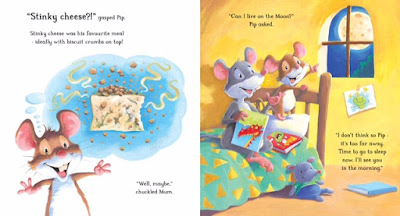 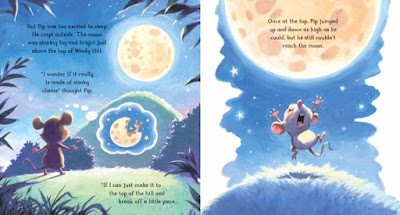 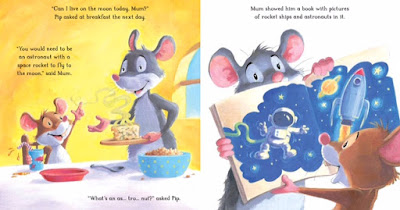 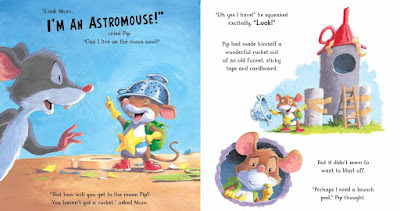 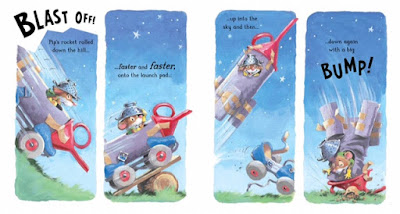 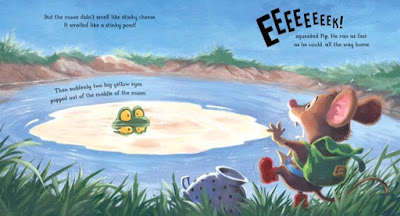 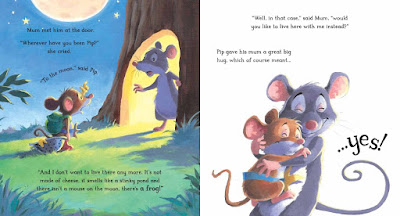 
This delightful book with its expressive and animated illustrations also contains some wonderful life lessons.
Pip, an adorable little mouse, and his mum, are out one night moon-gazing and Pip thinks he spots a mouse on its surface.  He points this sighting out to his mum (who cannot see it for the life of her)  and she responds to her beloved child by saying:

"I'm not surprised",  she added
"People say that the moon is made of cheese."

Immediately Pip's interest and imagination are ignited by her response and he longs to travel to the moon to sample and nibble stinky cheese to his heart's content.  To excited to sleep he makes his way to the top of Windy Hill where the moon is shining big and bright. It seems properly positioned for Pip to break off a little chunk and enjoy a chomp of... mmmmm... stinky cheese.  All his efforts to jump up and down, and as high as he can to reach it comes to naught.

The next morning he discusses his failed attempt at a moon landing with his mum. She tells him to travel though space he would have to become an astronaut and fly in a rocket ship.  Little Pip then transforms himself into .... ATROMOUSE!!!  He makes a  rocket ship out of an old funnel, some sticky tape and cardboard.  There,  that should do it. He is ready to blast off!

Unfortunately things don't go as planned and he crash lands with a bang and a thump and his rocket ship implodes.  Oh my! Will Pip give up his dream of being the first mouse astronaut to reach that far away moon and see if it truly made of stinky cheese?

Something happens to give Pip a change of heart about going to live there.  I wonder what?   For now he seems content to live in his own cozy home with his sweet mum who loves him dearly. Astromouse launches himself and leaps into her open arms to seal the deal with a hug and I'm sure a kiss.  Kids will love this story.  I highly recommend it. 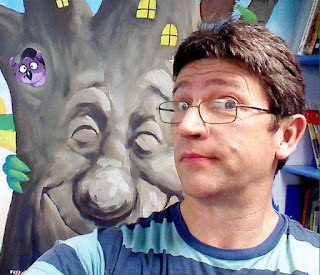 Steve Smallman has been working as an artist and illustrator for many years, and has created many successful childrens books as well as original visuals for children’s television. He lives with his family in Lichfield in the English midlands and is especially skilful at animal illustration

I've always loved to draw. I used to spend hours as a child copying cartoons from comic books or pictures of animals from encyclopaedias. I remember when I was about 10, painting a picture of a man fishing and being so engrossed in it that I didn't notice that the house was on fire!
At one point I thought that I might like to be zookeeper so that I could work with the animals all day and draw them in my lunch break. When I was 17 my careers teacher at school suggested that I might like to be an artist instead. I could still draw and paint the animals but I wouldn't have to shovel any poo! It was a moment of revelation to me. It had never occurred to me before that you could get paid for something that you did as a hobby!


I decided to go to art college (Cambridge College of Art and Technology) where one of my tutors was  the brilliant Colin McNaughton who inspired me to become a children's book illustrator. I was lucky enough to be commissioned to illustrate my first 4 books while I was still at college and over the next twenty years did illustrations for books, comics, magazines, licensed products and  for television programmes; most notably 'The Raggy Dolls' (ask your Mum!)

Then I decided to have a go at writing. I'd written a few very short reading scheme stories as part of an illustration project. They had gone down well so I tried my hand at writing a picture book.
It was called, 'The Lamb Who Came To Dinner' which was published by Little Tiger Press in 2006 and was shortlisted for The Red House Book Awards, Commended in the Sheffield Children's Book Awards, translated into several different languages, turned into a theatre play in Sweden and read on TV by Meatloaf.  I've now written over 50 books with more on the way.


Nowadays I  spend a lot of time  visiting schools, libraries and festivals. I love reading my stories and drawing pictures to a live audience. I also paint murals in schools, libraries and homes (even dog's homes).
I am so lucky that I get to do all these fun things, call it my 'work' and get paid for it too! It certainly doesn't feel like a 'proper job'.


I've been married since 1980 to my wonderful wife Ann who deserves a medal for putting up with me for so long. We have 4 great children who are all grown up now but my memories of them growing up inspire and inform my writing as do our 7 adorable, energetic, hilarious and exhausting grandchildren.

Go to the top of my blog at the right hand corner (below my photo) and please donate what you feel lead to give.  The amount you donate and the frequency you donate is totally up to you.  I thank you in advance for your support.  I love what I do and appreciate any amount that you may give so I can make our community even better.  Thanks a million!

Posted by Storywraps at 8:13 AM

Featuring Look!  It's the Poo Art Gallery.  It is the baby rats favourite place to be.  They can't stop thinking and talking about... 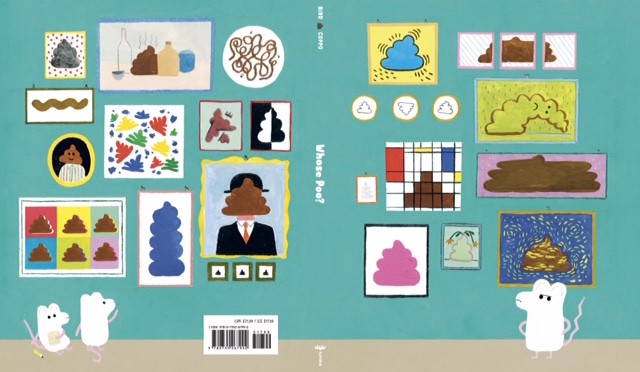