Recognize any of these dolls?  Yes, you are right.  They are all Barbie Dolls!  If you ever owned one or know someone who does then this book will delight you from cover to cover!  Buckle up everyone you are about to enter the spectacular world of Barbie.  It's a magnificent ride! 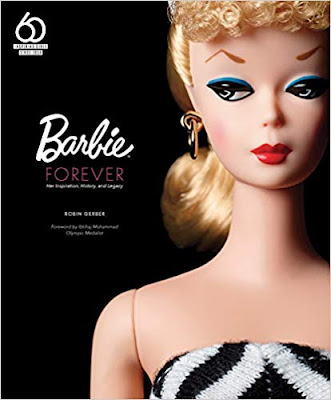 "The copiousness of rare photos and in-depth narrative elevates this book above any mere collectible coffee-table book to be glanced through idly then discarded. This is a photo book, a study book, to be loved and enjoyed by anyone who has known the joy of immersing themselves in the world of the original girl who could grow up to be anything."
- Critical Blast

"Barbie Forever is a book that will give you tremendous insight into how one doll and one company could take the world by force. This is a great coffee table read and would be perfect in anyone’s home"
- The Nerdy Girl Express 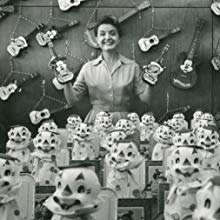 There are endless ways to play with Barbie, and for sixty years, girls have loved the fantasies that the doll helps them create. Barbie lets them see themselves as women of action, women in the world doing interesting jobs and having amazing adventures. Girls see her as a blank slate that can reflect and embody their ideas about growing up and creating exciting futures to live into. And surely, if they have read the story of Barbie’s “mom,” the woman who first imagined the doll, they would want to play at being her as well. Barbie sparks inspiration likely because her creator, Ruth Handler, embodied it herself.


Ruth Handler, circa 1958, with several of Mattel’s hit toys, including the Mousegetar, the Popeye Getar, and a few dozen Jack-in-the-Boxes. 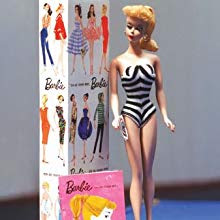 There is a sixty-year history at Mattel of determining how best to market Barbie. Understanding and responding to parental concerns and getting public interest in Barbie were Ruth Handler’s main concerns as she moved toward introducing the first Barbie to the world. She was a master at marketing, but she had never had a challenge like the doll she created. It was 1958, and Ruth was almost into her third year of bringing the Barbie doll to market when she began to get seriously worried. Plans were being made for Toy Fair in March of 1959, where Ruth envisioned a grand unveiling of the doll.
Mattel’s original 1959 Barbie, dressed in her iconic black-and-white swimsuit and holding white sunglasses, complete with metal stand and original packaging. 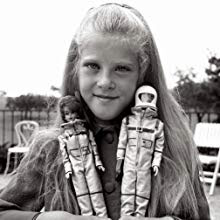 Barbie started out as a teenage fashion model, but she has come a long way from that first job, and she still has a long way to go. Barbie “careers” have reflected not only the broad range of women’s roles in the world, but also their aspirations. She has also gone beyond early expectations of how children would play with her. In 1963, the Saturday Evening Post wrote, “Mattel has proved that girls in the nine to thirteen age group want a doll not to mother but as a means of looking ahead to the days of the pizza party, the football weekend, and the Junior Prom.” That view of girls’ dreams and imaginations was far too narrow.


A young French girl poses in 1965 with her new Christmas toys: Miss Astronaut Barbie and Mr. Astronaut Ken, ready for their journey in space. 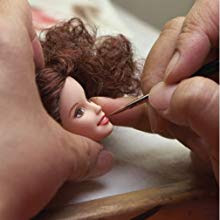 If you wanted to make your own doll, you would be in good company. Humans have made dolls for thousands of years. Early dolls in Egypt and Greece were made of wood or clay and were used in religious ceremonies. From Rome to Japan, doll making was part of early civilization. Cloth and animal bone, corn husks and bark, all served to make representations of humans and grew to be part of children’s imaginative play. But over time, dolls became more sophisticated and elaborate. Artisans in Germany and France made exquisite dolls from porcelain and even more fragile wax. And in America, children cherish dolls from the Old World and also made new ones from wood and clay.

Designers carefully paint lips and eyes on the dolls by hand. 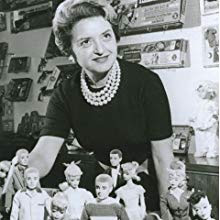 Barbie’s first fans were quick to let Mattel know that they wanted Barbie to have a friend. There were thousands of letters asking specifically for a boyfriend for Barbie. This made perfect sense to Ruth. She had seen her own daughter playing with both female and male paper dolls.

Ruth Handler with a collection of Barbie and Ken dolls from the early 1960s. 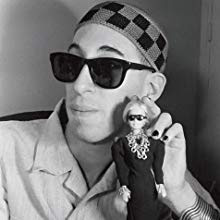 Barbie was destined from the start to have a beautiful wardrobe. She was the brainchild of Ruth Handler, and Ruth loved fashion. Every photo of Ruth from the 1950s shows her in stylish clothes that show off her figure.
Artist and fashion designer BillyBoy posing with one of his dolls. He had a collection of more than eleven thousand Barbie dolls and three thousand Ken dolls. He also authored the 1987 book Barbie: Her Life and Times. From 1984–90, Mattel sponsored two fashion tours curated by BillyBoy, and later he worked as both a designer and consultant for Mattel, where he designed two Barbie dolls. 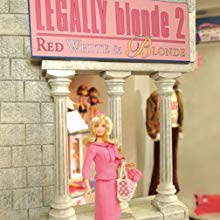 Barbie has been a global phenomenon for six decades. The Barbie experience, grown from Ruth Handler’s belief that there is a better way to express fashion play—and that little girls want to play at being big girls—is universal. From Asia to the Middle East, from Australia to Alaska, you can circle the globe today and find girls and boys letting their imaginations build new adventures for the many toys that are part of the Barbie brand. 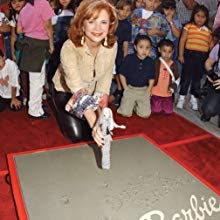 THE MAGIC OF BARBIE

Barbie has fans of all ages, races, and genders. They live all over the world, and their affection for Barbie is enduring. But can it last forever? The best answer comes from the children and parents, the fans and collectors who continue to be inspired, delighted, and empowered by Barbie. Here’s a wonderful example from one mother and daughter.
Barbara Handler—daughter of Ruth and Elliot Handler, and namesake for the Barbie doll—poses with a Barbie doll after placing her hands in cement that will adorn the sidewalk at the Egyptian Theatre in Hollywood, California, in an event designed to honor Barbie, on November 13, 2002


This book is part of the 60th Anniversary of Mattel's iconic Barbie Brand. There are not enough superlative adjectives to describe the detail, history, original sketches, interviews, vintage photos, advertisements and much more that this treasure trove contains.  I actually gasped when I opened my package from the publisher and discovered such a beautiful and comprehensive book inside.  I felt like I needed to don a pair of white gloves to turn the pages and I recognized immediately that this book is museum-worthy.

The author Robin Gerber asked wonderful questions from the designers, artists, marketers, and managers.  She posed questions about the ionic doll such as:

" How has Barbie lasted so long? And how long could she go on?"
"In the process she learned that Barbie is still everything she was originally intended to be, as a vehicle to imagine anything they can become. "

The book explores the genesis of Barbie and her evolution from generation to generation.  She is very popular having world-wide fame.

Her coming out party took place in 1959 and she has been making statements in art, fashion and culture ever since she emerged into the marketplace.

She has been an interpreter of taste and style in every historic period she has lived through and has reflected female empowerment through more than 200 careers she has embodied.  Today, an international icon, Barbie continues to spark imaginations and influence conversations around the world. The author has included a double-sided foldout timeline highlighting the important moments in Barbie's history.

The book is one for doll advocates ( especially Barbie dolls ) and would find a perfect spot on your coffee table to be displayed for all to thumb through. As it a gift it would be perfection!  I highly, highly recommend this keeper. 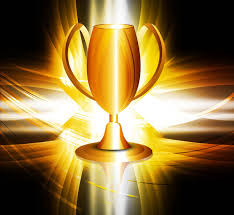 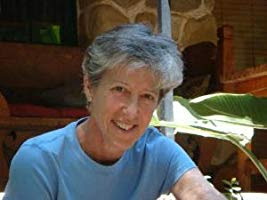 Robin Gerber is a best-selling author and historian. She is the author of the bestseller Leadership the Eleanor Roosevelt Way: Timeless Strategies from the First Lady of Courage (Penguin/Portfolio). Her most recent book is the first biography of the founder of Mattel, Ruth Handler: Barbie and Ruth: The Story of the World’s Most Famous Doll and the Woman Who Created Her. Her articles have appeared in USA Today, the Washington Post, The Philadelphia Inquirer, and numerous other newspapers and magazines. Prior to becoming an author, Robin practiced law in Washington, DC, and worked on Capitol Hill. She has studied and written about leadership development since 1975.