The Poppy Lady - a bookwrap 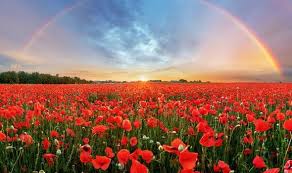 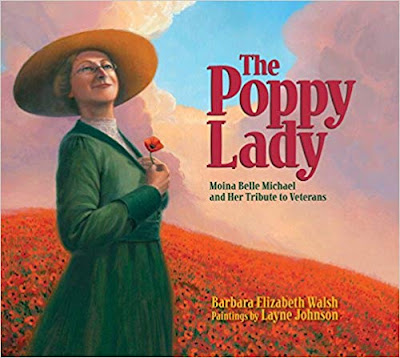 The Poppy Lady: Moina Belle Michael and Her Tribute to Veterans

Moina Belle Michael was teaching at the University of Georgia’s Normal School in 1917, when her country entered the first World War. Vowing to do what she could for the “lads” in uniform, she began by knitting socks and rolling bandages. Later she took a position in New York City, where she helped departing soldiers. Inspired by McCrae’s poem beginning “In Flanders fields the poppies blow,” Michael launched a successful campaign encouraging people to wear poppies in honor of fallen soldiers. An epilogue brings the story up-to-date. Inspired by Walsh’s father’s contact with Michael when he was a solider in World War II, this informative picture book is based on original interviews as well as Michael’s book The Miracle Flower (1941), articles, and websites. Rich with color, Johnson’s narrative paintings portray Michael’s life and times with warmth, drama, and attention to detail. Teachers looking for a heartfelt alternative to the familiar, too-often-pedestrian children’s books on Veterans Day and Memorial Day may want to introduce their students to the compassionate, determined “Poppy Lady.” Grades 2-5. --Carolyn Phelan
Review

Since WWI, red poppies have been used to commemorate fallen soldiers; Walsh explains why in a glowing tribute to the woman behind the symbol, Moina Belle
Michael, a professor at the University of


Georgia who "wanted to do more" for the men in uniform, and who went on to contribute to the war effort in several ways. Johnson's oil paintings offer several dramatically lit, almost beatific portraits of Michael as well as one scene of a somber WWI battlefield, covered with red poppies and white crosses. . .

Inspired by Walsh's father's contact with Michael when he was a soldier in World War II, this informative picture book is based on original interviews as well as Michael's book The Miracle Flower (1941), articles, and websites. Rich with color, Johnson's narrative paintings portray Michael's life and times with warmth, drama, and attention to detail. Teachers looking for a heartfelt alternative to the familiar, too-often-pedestrian children's books on Veterans Day and Memorial Day may want to introduce their students to the compassionate, determined 'Poppy Lady.'
Carolyn Phelan

Most children have seen red poppies for sale around Veterans Day, but how many of them know how they came to be associated with veterans? Johnson's lush and vivid illustrations on oversize spreads depict the world at that time-the soldiers going off to war, the women working on the home front, and period dress.
. . . can be used to talk about Veterans Day, included in a study of World War I, and to foster talk about what it means to serve your country. The copious back matter allows students to read further.
Joan Kindig

Barbara Elizabeth Walsh's wonderfully illustrated book, The Poppy Lady: Moina Belle Michael and Her Tribute to Veterans brings the origin of red poppies used to commemorate fallen soldiers to today's children.
Layne Johnson's beautifully painted illustrations add detail, color, and definition to Barbara Elizabeth Walsh's narrative around a compassionate woman who felt she couldn't do enough to honor veterans. She lived her life always wanting "to do more" for the men and women who gave so much.
The Poppy Lady is an informative read. Johnson's frame-worthy illustrations bring to life a determined woman whose life goal created a symbol in the red poppy still acknowledged and revered.
Sandra Miller Linhart

Unwappimg  Some Illustrations From the Book 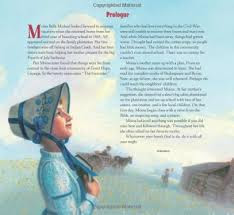 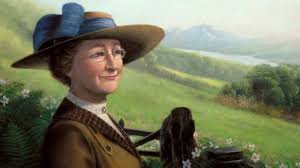 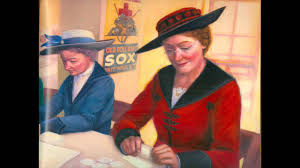 When American soldiers entered World War I, Moina Belle Michael, a schoolteacher from Georgia, knew she had to act. Some of the soldiers were her students and friends. Almost single-handedly, Moina worked to establish the red poppy as the symbol to honor and remember soldiers. And she devoted the rest of her life to making sure the symbol would last forever. Thanks to her hard work, that symbol remains strong today. Author Barbara Elizabeth Walsh and artist Layne Johnson worked with experts, primary documents, and Moina's great-nieces to better understand Moina's determination to honor the war veterans.

A portion of the book's proceeds will support the National Military Family Association's Operation Purple®, which benefits children of the U.S. military.

The illustrations are extraordinary and the message is educational and historical.  This woman single-handedly pioneered a national compaign to establish the red poppy as a symbol of the sacrifice and bravery of those soldiers who fought and died so we could have freedom in our land.  Moina's mission in life was to help and be-friend soldiers at a time when she was needed and appreciated the most.... war time!   This story is truly inspirational and I feel that this book should be in every classroom and library.  I highly, highly recommend this beautiful, heartwrarming book. 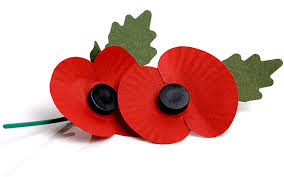 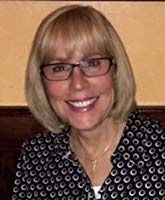 Award-winning children's book and magazine author, Barbara Elizabeth Walsh, has fond memories of poppies and parades honoring her father and other veterans. During World War II her father knew Moina Belle Michael, the Poppy Lady. Barbara worked with experts, primary documents, and Moina's great-nieces to better understand Moina's determination to honor the war veterans. "The Poppy Lady," her first children's book, received lovely recognition, including the Eureka! Children's Nonfiction Book Award and Bank Street College of Education, Best Children's Books of the Year. A former elementary-school teacher, Barbara has written articles for Highlights for Children and Cricket. She is a member of the SCBWI and a visiting author who speaks in schools and to an array of community groups. She and her husband live in Mantoloking, New Jersey, and Key Largo, Florida. 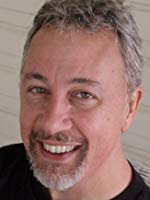 An award-winning artist, Layne Johnson has created art for more than 20 books for children. Discussing the appeal of creating books for young readers, in an interview with Cynsations' Cynthia Leitich Smith, Johnson said "It's challenging to show not just what the words say but what they don't."

His picture books include:
>> "Farmer George Plants a Nation" - recognized as a School Library Journal Best Books of the Year, and NSTA Outstanding Science Trade Books for Children.
>> "Off Like the Wind!: The First Ride of the Pony Express" - winner of the Western Heritage Award from the Cowboy Hall of Fame.
>> "The Poppy Lady: Moina Belle Michael and Her Tribute to Veterans" - a 2016 Storytelling World Award Honor book, nominated for the Triple Crown Award and recognized as a Mamie Eisenhower Library Project Book of the Week. 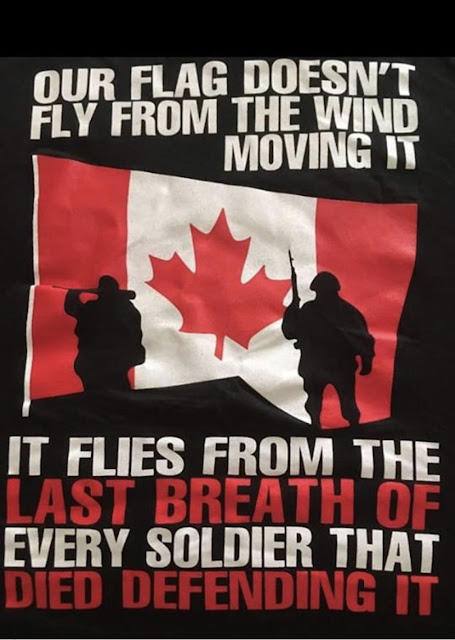 Remembering today the brave heroes that defend and protect us with their very lives... our soldiers.  Thank you so much for your service to our country and for keeping us all safe so that we can live in peace!  God bless you all. You are valued!

Posted by Storywraps at 8:46 AM