The Story of Fish and Snail. - book review

"There is a great deal of difference between an eager man who wants to read a book and a tired man who wants a book to read."
~ G.K. Chesterson

Title:  The Story of Fish and Snail
Author and Illustrator:  Deborah Freedman
Ages: 3-7 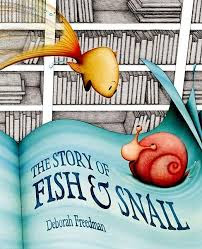 Right from the title page you dive into this book with glee!  On top of a tall stack of books (the top one open like an invitation), a  perky, curious, golden fish accepts the invitation and dives right in.  Water splashes up into the air creating a wonderful, whimsical world of pure magic and fun.  This book is a remarkable underwater macrocosm where Snail waits patiently for his friend Fish to come and tell him a story.  Fish is so excited (about Pirates) and says to Snail that today he cannot tell him the story but wants to actually take him to the story so he can experience the excitement of the tale himself.  This request does not sit well with Snail who is apprehensive about leaving his book.  He tries to relay his feelings and disinterest. "I don't want to go into other books," he says. "I like this book."  An argument ensues and Fish swims off in a huff.  "Fine, Snail. Good-bye. The end." Snail remains where he is not budging one iota.  Snail musters up courage, looks over the side of the mountainous book pile and thinks about jumping off .  "Fish?" he calls uncertainly and then he takes the plunge.  With a huge splash (the height of the book pile) Snail disappears into the new book.  Fish peers around the corner of the page ready to forgive his friend and start their adventure together.

The watercolour world of this book is truly stunning.  The cartoon-like characters emit lots of emotion and become endearing to the reader.  The book is encouraging us to step out of our comfort zones, take a risk and try to experience some new things.  It also highlights the value of compromise and loyalty between two long-time friends.  Hopefully kids will read this story and be encouraged to open the door  of opportunities wide and encounter something new that will change their world forever. 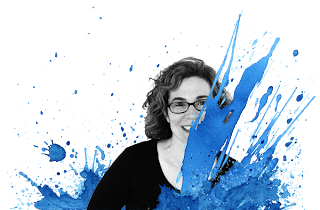 was an architect once-upon-a-time, but now she loves to build worlds in children's picture books. She is the author and illustrator of Scribble (Knopf 2007), and Blue Chicken, which was released by Viking in 2011 to three starred reviews including one by Kirkus Reviews calling it "simply exquisite". Deborah lives in a colorful house in Connecticut, where she is looking forward to the June 2013 publication of The Story of Fish & Snail, and is busy at work on her next book.

Read on and read always!
Posted by Storywraps at 10:45 AM