Walter "Walt" Whitman was an American poet, essayist, and journalist. A humanist, he was a part of the transition between transcendentalism and realism, incorporating both views in his works. Wikipedia 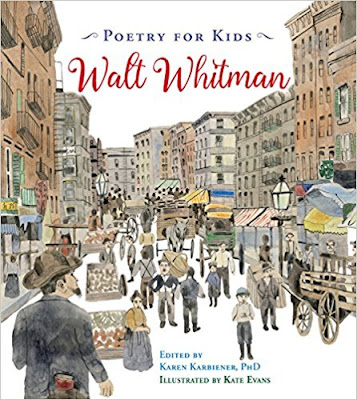 Unwrapping some illustrations for you...
Kate Evans is the illustrator 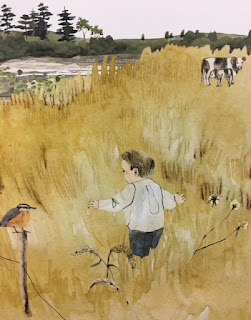 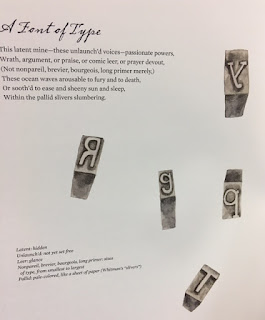 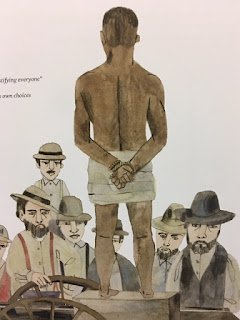 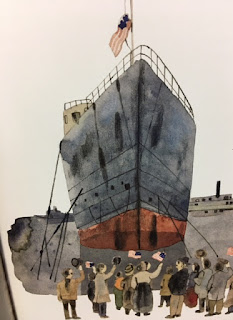 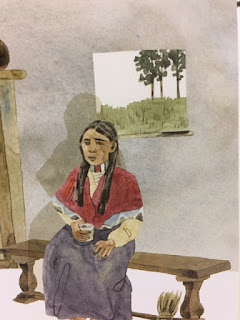 This beautiful book of poems is a perfect introduction to the famous American poet Walt Whitman.  There are 35 carefully chosen poems for kids to enjoy.  The poems are presented and explained by New York University professor Karen Karbiener, PhD, a Whitman expert.

Each poem features commentary on its content, definitions of perhaps unfamiliar words to a child, and an enlightening forward that gives educational background on the poet himself and how the book is designed.  The illustrations make the words come alive contributing a visual form of poetry themselves.

The collection features a variety of poems that are kid-friendly and describe life as Walt Whitman saw it.  I love at the end of the book a section entitled "What Walt Was Thinking".

Here is a taste of one of his poems...

A Woman Waits For Me (excerpt)

They are not one jot less than I am,
They are tanned in the face by shining suns and blowing winds,
Their flesh has the old divine suppleness and strength,
They know how to swim, row, ride, wrestle, shoot, run, strike, retreat, advance, resist, defend themselves,
They are ultimate in their own right -- they are calm, clear, well-possess'd of themselves. 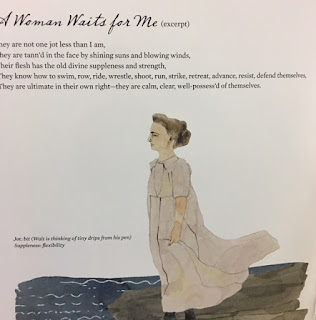 Jot: bit (Walt is thinking of tiny drips from his pen)
Suppleness: flexibility

At the back of the book from: What Walt was Thinking

Women's rights and abolitionism were two revolutionary movements that developed simultaneously in the mid-nineteenth century.  In his journalism, Walk had long defended women's rights for fair salaries and equal treatment.  This poem celebrates their strength of character as well as their physical bodies.  His ideas were considered so progressive that this pen was banned from publication in 1882.

I highly recommend this book (and this series).  It would be a beautiful collection to own and what better month to start than April when we celebrate National Poetry Month.

I effuse my flesh in eddies, and drift it in lacy jags.
I bequeath myself to the dirt to grow from the grass I love,
If you want me again look for me under your boot-soles.
You will hardly know who I am or what I mean,
But I shall be good health to you nevertheless,
And filter and fibre your blood.

Walt Whitman was one of the most influential poets of the 19th century. Completely self-educated, Whitman read the works of Homer, Shakespeare and Dante as a child. At age 16 he became a school teacher and founded a newspaper at the age of 19. In 1840, Whitman had his first novel published and several short stories. In 1855, Whitman published Leaves of Grass – the work for which he is certainly best known. The collection of poems in Leaves of Grass are celebrations of the harmony between the human body, spirit, and senses, in combination with the natural world. “Song of Myself”, “I sing the Body Electric”, and “Out of the Cradle Endlessly Rocking” are among the most highly regarded of the poems in Leaves of Grass. Walt Whitman had great admiration for Abraham Lincoln and dedicated the poem made famous in the movie Dead Poets Society, “Oh Captain, My Captain”, to the fallen president in Leaves of Grass. Today, Whitman remains inspirational to modern day poets not just in America, but in Latin America and France as well.

Karen Karbiener is a Whitman scholar at New York University. She has published widely on Whitman's life and work, and edited Leaves of Grass: First and Death-bed Editions for Barnes & Noble Classics. She is a recognized public scholar and has been featured in radio, television, and online programs, authored two audio books on Whitman's cultural legacy, and hosts New York City's annual "Song of Myself" Marathon. She lives in New York City.

Freelance illustrator and fine artist Kate Evans has worked for many high-profile clients, including Random House, HarperCollins, V and A Magazine,The Guardian, and National Geographic. Her illustrations have been published in many countries around the world.Combining delicate line drawings with watercolor washes, Kate produces images that reflect the richness of their subject matter. Her illustrations suggest subtle emotional states and have been frequently used by publishers to capture the complexity of particular places and situations. 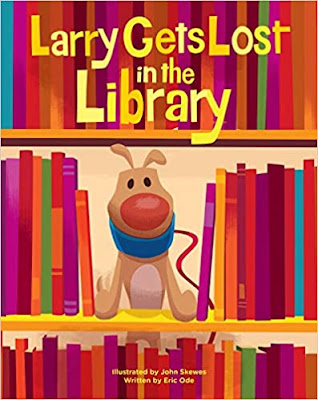