What do you do when you a "Giant" sized cold??? 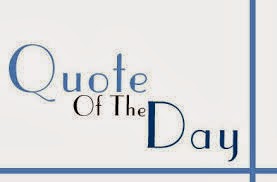 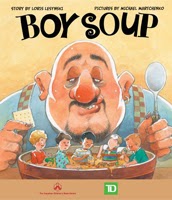 Backstory:  This book was originally published in 1996.  It has been re-issued with new hilarious illustrations by the infamous Michael Martchenko, who is best known for his artwork for Robert Munsch.  This year, TD Bank in Canada ordered  500,000 copies to distribute to kids for their yearly literacy programme. Their mission is to celebrate the importance of children's literacy and encourage the joy of reading.  It is an awesome honour to have your book chosen.  I re-chose it (that's like re-tweeting it) to review because not only is it a fabulous book to highlight but it is that time of year when the subject hits home....yes, in Canada, it is "Cold" both weather-wise and health wise.  Enjoy. It is a winner for sure.

What's it all about:  What does a giant do when he wakes up with a giant cold and a sore throat?  What does he do? Well he consults his "Giant's Home Medical Guide" of course.  Eyeballs scrolling down they land on the perfect remedy, Boy Soup!  He will need to assemble some boys for the recipe but the fun part is he mistakenly corals a GIRL, named Kate.  Kate is so smart, she figures out a way to save the day and rescue the boys from a sure tragedy.  She convinces the Giant that the recipe calls for soup made by boys and not with the boys as the main ingredient.  The book takes young readers on a rhyming journey that brings friendship, courage, and fast-thinking to life as Kate saves her friends from a soupy fate. 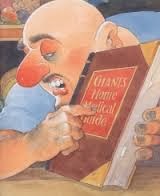 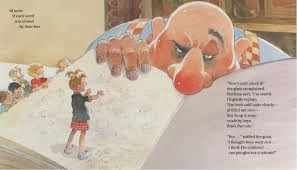 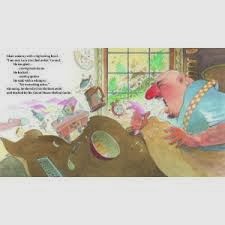 “You’ll be joining the ranks of Lee, Prelutsky, and Silverstein. You are much needed!”
—Sam Sebesta, author and Professor Emeritus, Children’s Literature, University of Washington
Loris Lesynski doesn’t just write poems for kids. She takes them into classrooms to test them out on her target audience, then perfects them until each one gets kids laughing and tapping to the rhythm. Her latest offering,Crazy About Basketball! (Fall 2013), comes on the heels of Crazy About Soccer! (2012). Both books combine her love of language with the most popular sports in playgrounds today.
Loris Lesynski’s first picture book, the wildly popular Boy Soup, was published in 1996 and reissued with new art in 2008. In the rollicking rhyme of Ogre Fun(1997), an ogre-boy tries to cure a contagious case of yawning. Catmagic(1998), another rhyming picture book, tells the story of Izzy the splotchy cat, who decides to find a way to live on the ceiling in the cluttered and colorful Witches’ Retirement Home. In Night School (2001), Eddie finds a school for kids who like to stay up late. Rocksy (2002) is the hilarious tale of a girl named Roxanne who fatefully wishes she were made of stone to avoid scrapes and scratches in the playground.
Loris greatly enjoys speaking at teachers’ and librarians’ conferences to share insights on selecting, enjoying, and performing rhythm and rhyme from the author’s point of view. She also does occasional school visits, preferably to a maximum of two or three classes, in a library setting, with lots of time for questions (children’s and teachers’) about writing, drawing, publishing, design, or other authors. Handouts of classroom activities are made available, full of ideas gathered from many different schools and their unbelievably creative teachers, and she sends a poster to the school in advance so the kids have a good sense of who is coming (this is because, she says, she spent most of her own childhood quite lost in her thoughts and often wondered after an event, “Who was that?”).
In 1999, Loris recorded her books on tape for the Canadian National Institute for the Blind, and they’ve all been converted into Braille.
Loris lives in Toronto. She can be reached at 416-802-0064.

“I try to give the kids in my illustrations spunk and make them a bit defiant; they’re always sticking out their chests and standing up for themselves. Did you notice how in Thomas’ Snowsuit Thomas causes the school principal’s hair to turn whiter in frustration as the story progresses?” asks Michael Martchenko in a Quill & Quire interview.
Michael is recognized as one of the fastest illustrators in the country. According to an interviewer in Applied Arts Quarterly, “Such rapidity seems to suit the artist’s joyful sense of spontaneity.” Michael immediately breaks down a manuscript into a storyboard. He explains: “As I read, I get all these great pictures in my mind. I think about funny situations, and then start sketching.” After he has completed a rough, it takes approximately another four hours to create a finished drawing. For most of his books, Michael likes to use watercolor and pencil, as well as a generous dose of his own visual humor.
Before he became a children’s book illustrator, Michael had already launched a successful career in advertising. Fortunately for fans of children’s literature, the Annick Press publishers and Robert Munsch saw Michael’s work—a scene in a park featuring pigeons equipped with landing gear—at a graphic arts exhibition, and felt that anyone with such a playful imagination should illustrate children’s stories.
Since 1980, the year he worked with Robert on The Paper Bag Princess, Michael has illustrated over 30 books for children and has exhibited his work throughout North America. He won the Ruth Schwartz Award for Thomas’ Snowsuit in 1986, and has won additional awards for design and illustration.
To celebrate the publication of The Paper Bag Princess twenty-five years ago, Annick Press published The Paper Bag Princess 25th Anniversary Edition (2005) which has the complete storybook, how the book came to be, and never-before published original sketches.
Michael’s has also collaborated with Loris Lesynski on Shoe Shakes (2007), a zany blend of story-poem and toddler-friendly rhymes. They also worked together on “I Did It Because...”: How a Poem Happens (2006), a unique collection that blends “best of” with “how to.”
Growing up in a small town north of Paris, France, Michael loved comic books and learned a lot about visual humor from watching cartoons. He moved to Canada when he was seven. By high school Michael knew that he wanted to make art his career. Upon graduation from the Ontario College of Art in 1966, Michael began working in commercial art. He was the creative art director for TDF Artists in Toronto until 1993. Michael’s other love is aviation art. He spends most of his time illustrating in his home studio.
Michael lives in Toronto with his wife, Patricia.

Thank you to all the people who entered my first Giveaway Book Contest.  It was so much fun and a special thanks to Teddy O'Malley and her mom Angie Dickens for donating the first ever book to be given away....and signed too!   Awesome!

Read on and read always!  Have an excellent day with your books.