Crazy About Basketball - a book review 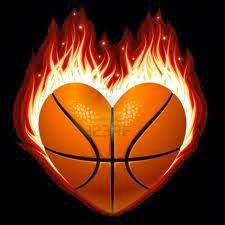 Quote of the day:   "The love of learning, the sequestered nooks,
And all the sweet serenity of books."
~Henry Wadsworth Longfellow 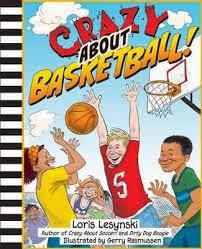 This book is a wonderful collection of basketball poems (40 in all) that will greatly appeal to boys (and girls) ages 8-12.  The poetry captures the joys, thrills, and challenges of one of the most popular sports today.  The book is full of humour and energy but most of all it captures the fun of the game.  The fabulous artwork capitalizes on the both the absurdity and seriousness of basketball.

There are also fun facts scattered throughout the book which will be of great interest to those playing the game. The poems concentrate on the training, tactics, and teamwork that is needed to participate in basketball. The book truly is a call to action to come one and all, grab your runners and get on that court and shoot some hoops! Celebrate it together!

1.  take your class into the gym or outdoors and play a game
2.  discuss the comparative and superlative adjectives found there
3. work with action verbs
4.  health class can be about nutrition and how to keep your body fuelled to play
5.  art class - design your own jerseys for the game
6.  write your own action poem about basketball and then proudly show the the jersey you designed to the class
7. talk about sportsmanship and being a great team member

the game of it
the aim of it
we love it every time
I think this year our basketball
should get a valentine!

Loris Lesynski has been wowing readers with her wacky wordplay for 10 years. She is a popular visitor to schools, libraries and educational conferences across North America. Among her books are: "Zigzag: Zoems for Zindergarten," "Cabbagehead," "Nothing Beats a Pizza," and "Dirty Dog Boogie."
Michael Martchenko is a multiple award-winning illustrator best known for his work with Robert Munsch. His books are beloved by readers all over North America.

Gerry Rasmussen is an internationally syndicated cartoonist who draws the comic strip Betty, which has appeared in newspapers and magazines around the world since 1991.
Gerry began his career studying to be a painter in the University of Alberta's Fine Arts Program. By his fourth year, however, he had achieved such a level of success drawing cartoons for the U of A newspaper, The Gateway, that he decided to leave his studies and begin drawing cartoons full-time. While still at the U of A, Gerry had teamed up with Gary Delainey in 1976 to produce a comic strip for The Gateway called Bub Slug. This comic strip was revamped for The Edmonton Journal in 1985 and appeared weekly as a full page color comic strip set in Edmonton and featuring many local characters.
In 1990 Delainey and Rasmussen received an offer from United Feature Syndicate in New York to syndicate their comic strip worldwide with Bub Slug’s wife, Betty, as the main character. The comic strip was renamed Bettyand has been appearing daily ever since. Betty is now distributed by Universal Uclick and can be seen in magazines and newspapers in ten countries.
Besides drawing the Betty comic strip, Gerry has used his cartoons to illustrate magazine and newspaper articles, and create animated TV ads. He loves to see his cartoons used to help people communicate more effectively.
Gerry’s first book with Annick Press paired his talents with those of poet extraordinaire, Loris Lesynski. Crazy About Soccer! (2012) provided the perfect canvas for his energetic and humorous style. Following in the footsteps of that success is Crazy About Basketball! (Fall 2013), in which Gerry’s lively illustrations capture the fun of the game.
Gerry lives with his family in Edmonton, Alberta.

Read on and read always!   See you tomorrow right here!

Posted by Storywraps at 9:39 AM