Kiya.....take that you mean old wolf! 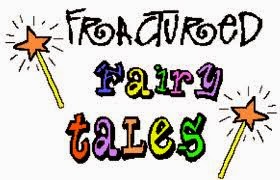 Welcome everyone to my blog today.  Glad you could stop in a while.  Here is the answer to yesterday's book quote for you.  The book is "Chitty Chitty Bang Bang" and the author is Ian Fleming.

Today's quote is:  "When Mary Lennox was sent to Misselthwaite Manor to live with her uncle everybody said she was at the most disagreeable-looking child ever seen." 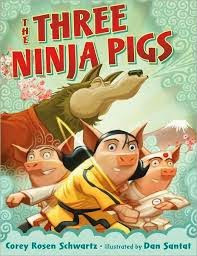 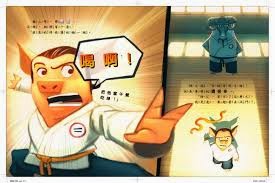 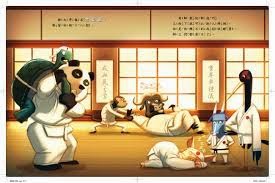 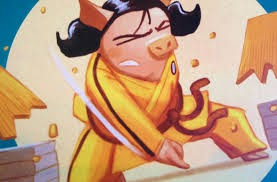 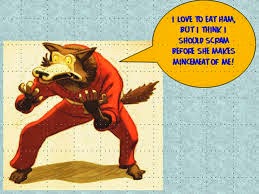 This story is a wonderful twist on the original fairytale.  Three little pigs live in Japan and this big old mean wolf just saunters into town one day and thinks he'll blow it all apart.  The little pigs hear of this weapon of mass destruction and start preparing for the thug's arrival at their door.  The first little pig goes off and takes aikido lessons but it's not long before he loses interest and his "I'll make mincemeat out of that wolf" is but a fleeting dream.  The second brother learns jujitsu and he chops, chops, chops until it is not a novelty anymore and loses interest.  The third little girl pig, on the other hand, takes up the art of karate.  She works out diligently, she wills herself to do her best and to put into practise what she has been taught. She excels at the art and hones her skills to perfection.  When she finally comes face to face with the big bad wolf after her failing brother's attempts to ward him off, she proves herself to be a force worth reckoning with. She fearlessly declares to the punk, "watch where you're steppin'/ I'm a certified weapon."  The bully wolf, with his tail between his legs, succumbs to her powerful, "KIYA'S!" and heads for the hills never to be seen again.

The illustrations are sassy and smart-alecky (is that a word?) and the rhymes roll out packing a punch to the twists and turns the author has created in this familiar bedtime story.  I liked that the girl pig was the hero of the story and saved the day.  The book is pure entertainment and loads of fun but with a moral ... you need to work hard and practise your skills with determination if you are to succeed.  Highly recommended by me.

Corey is the author of HOP! PLOP! (Walker, 2006), THE THREE NINJA PIGS (Putnam, 2012) GOLDI ROCKS AND THE THREE BEARS (Putnam, 2014) and NINJA RED RIDING HOOD (Putnam, 2014). Corey has no formal ninja training, but she sure can kick butt in Scrabble. She lives with three Knuckleheads in Warren, NJ.

Read on and read always.  Have a super-duper day everyone.