BRING THE MAGIC OF THEIR LIVE CONCERTS

TO TODAY'S FAMILIES AT HOME

WITH THEIR NEW ALBUM 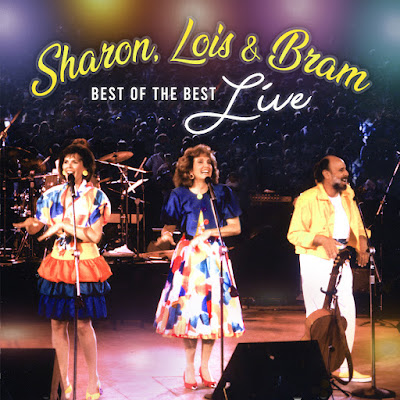 "Simply the best musicians for children in North America, and probably the world.” – Toronto Star

"It became one of the most successful performing groups for children in North America, with TV shows, Gold Records, and tours that sold out performances in major auditoriums.” – Los Angeles Times 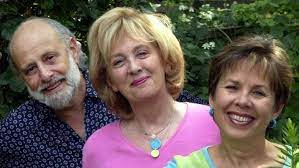 Canada’s iconic trio of family entertainers, Sharon, Lois & Bram, bring the magic of their live concert experience to today’s families with their first new album in 21 years. Sharon, Lois & Bram Best of the Best Live is set for release by Red Brick Songs on November 19, 2021.

Sharon, Lois & Bram Best of the Best Live sparkles with the full flavor of the legendary Sharon, Lois & Bram shows attended by hundreds of thousands of devoted fans around the world. The album presents more than 25 never-before heard live recordings from Sharon, Lois & Bram’s North American concerts during the years 1989 - 1995, in venues ranging from New York’s City Center to Ottawa’s National Arts Centre to LA’s Wiltern Theatre and more.

Two superfans, along with co-producer Randi Hampson, helped curate the album’s material by lovingly sifting through hundreds of recordings so that Sharon, Lois & Bram Best of the Best Live could capture the ultimate Sharon, Lois & Bram experience, enabling today’s families to enjoy a time machine excursion to the trio’s best concerts while singing along at home – even more important during these times of social restrictions when parents and children are unable to have many live performance experiences.

Original audiences will thrill to the music that so many cherish as the soundtrack to their childhoods, and for those families new to Sharon, Lois & Bram, this treasure trove of jazzy, foot-stomping medleys, lively banter, and enthusiastic audience participation will unveil what the excitement of a live Sharon, Lois & Bram concert was all about.

Sharon, Lois & Bram Best of the Best Live pulls out all the stops with 22 tracks of high-energy, singable/danceable numbers that showcase Sharon, Lois & Bram’s delicious sense of fun and spontaneity right alongside their impeccable musicianship and love for the families who sang along with them. The album comes alive from the get-go, with Sharon, Lois & Bram bursting onto the stage on “Rig A Jig Jig,” which fairly roars with good-natured cheer. Other highlights on this action-packed excursion include the ridiculously goofy pairing of “Dirty Old Bill” and “Miss Lucy,” the tight, three-part harmonies on the rocking, boogie-woogie “Hucklebuck,” an endearing rendition of Tom Paxton’s “Going to the Zoo,” and of course, the group’s signature song, “Skinnamarink,” which continues to symbolize the very best of humanity: friendship, joy, and love.

In their own words...

“We were surprised and thrilled to have these treasures unearthed and to take this musical trip down memory lane!” says Sharon Hampson. “We love hearing the audiences singing along and interacting with us. We smile as we listen to the playful banter we had with each other on stage. We are proud of the complex musical arrangements and harmonies, and we are transported back to the packed houses and joyful adventures we shared with Lois all those years ago.”

“We are joined on the album by the wonderful musicians who played at these shows, and especially our friends, fearless bandleader Grant Slater and amazing multi-instrumentalist Kirk Elliott,” adds Bram Morrison. “They toured with us for 30 of the last 42 years! I think, through singing and music, during thousands of shows, we have constructed a shared history with our audiences. We hope the attachment felt for us and our music has contributed to their well-being later in life and that this album will touch the lives of a whole new generation.” 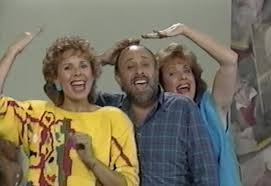 From 1978 onward, Sharon, Lois & Bram were preeminent in all aspects of family entertainment across North America and other parts of the world. Together, the threesome produced 21 full-length albums, starting with their iconic, triple platinum One Elephant, Deux Éléphants. They appeared in every major concert hall in Canada and many of the most prominent venues in the United States including Carnegie Hall, Lincoln Center, The Kennedy Center, Broadway’s Palace Theatre, and the White House. They received countless awards, including Gold and Platinum Records and JUNO awards for Best Children’s Album, and sold millions of albums worldwide. They also starred in two critically acclaimed television series: The Elephant Show (1984 – 1988, CBC Canada, with reruns on the Nickelodeon cable channel) and Skinnamarink TV (1998-1999, CBC in Canada and the Learning Channel in the U.S.).

Sharon, Lois & Bram supported many social welfare programs in Canada and the US, such as school breakfasts for learning, projects encouraging parents to inoculate their children, and, internationally, as Goodwill Ambassadors for UNICEF in North and South America, for which they received the Danny Kaye Humanitarian Award. For their years of work providing the best in participatory music for children and their families, Sharon, Lois & Bram were inducted into The Order of Canada, their country's highest honor.

Sharon Hampson and Bram Morrison carried on together for nearly two decades after Lois Lilienstein stepped away from live performing in 2000 and later died in 2015. They maintained a busy schedule of concerts that ranged from “sweet and simple” folksy duo shows to larger productions featuring members of the versatile Skinnamarink Band. Fans of Sharon, Lois & Bram returned to Sharon & Bram’s concerts as young adults or with their children and their children’s children. They knew every word and every action and greeted the duo as they would a treasured member of the family.

Sharon & Bram have, with very significant contributions from Sharon’s daughter Randi Hampson, been engaged in other creative ventures, including the release of a critically acclaimed duo album, Sharon & Bram and Friends, and the Penguin Random House picture book, Sharon, Lois & Bram's Skinnamarink, an award-winning best seller with more than 60,000 copies sold since its 2019 publication. Several more picture books are now in development. 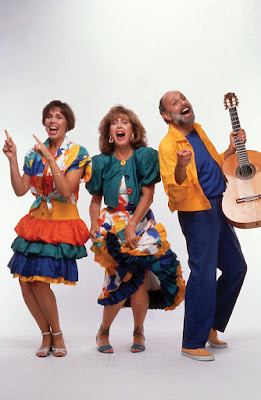 Posted by Storywraps at 8:22 AM