Pick this book and pocket it for sure..... 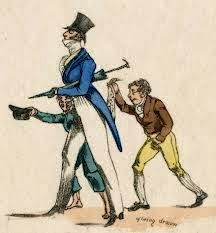 Quote of the Day:  ""Books serve to show a man that those original thoughts of his aren't very new at all."    ~ Abraham Lincoln

Thank you, thank you, thank you New York Review Children's Collection for resurrecting these classic stories so another generation can be exposed and enjoy these timeless tales from master storytellers extraordinaire.   This book was first published in 1967 and was one of the author's first.  Each time I receive a copy of these vintage books to review I hug the book close to my heart and am so thankful for the opportunity to highlight these "gems" for my readers.  This is a brilliant story I am sharing with you today.....Enjoy!

Leon Garfield (1921–1996) was born and raised in the seaside town of Brighton, England. His father owned a series of businesses, and the family’s fortunes fluctuated wildly. Garfield enrolled in art school, left to work in an office, and in 1940 was drafted into the army, serving in the medical corps. After the war, he returned to London and worked as a biochemical technician. In 1948 he married Vivian Alcock, an artist who would later become a successful writer of children’s books, and it was she who encouraged him to write his first novel, Jack Holborn, which was published in 1964. In all, Garfield would write some fifty books, including a continuation of Charles Dickens’s Mystery of Edwin Drood and retellings of biblical and Shakespearian stories. Among his best-known books are Devil-in-the-Fog (1966, winner of The Guardian Children’s Fiction Prize), The God Beneath the Sea (1970, winner of the Carnegie medal),Bostock and Harris; or, The Night of the Comet (1979; forthcoming from The New York Review Children’s Collection), and John Diamond (1980, winner of the Whitbread Award).

This book is so well written with intertwining threads of history, mystery, danger, tragedy, evil and finally redemption all woven together....yes, this book has it all.  The setting is 18th century London, England, and the main character is a young, twelve year old street urchin named Smith.  He is a pickpocket by trade, trying to survive in the midst of all the poverty and crime that surrounds him.  He is excellent at his craft and has the speed and the tenacity to just disappear into nothingness, "a rat was like a snail beside Smith and the most his thousand victims ever got of him was the powerful whiff of his passing and a cold draught in their dextrously emptied pockets."

The book gives you an up close view of the inside workings of London in that time period : it's streets, it's jails, it's dirt and poverty, and the various characters that were present and living in those surroundings.

One night Smith targets an older gentleman and abstracts an article from his pocket....alas it is not money but something Smith determines must be much more valuable because a few minutes later the old man is accosted and murdered by two thugs who are looking for the very item that Smith now has acquired.  It is a peculiar document with writing on it... but the rub? ... Smith is illiterate and cannot read the content.

He encounters a kindly, blind magistrate which he helps out and in return gets invited to stay and eventually live with.  You see Smith has previously been living with his two sisters, who make money sewing hanged men's clothing into new suits.  In his new acquired home he gets the opportunity  to be scrubbed down to the bone,  to dress in clean clothing for once in his life, to eat proper food that is nutritious and healthy for him,  and the best....to learn how to read. He then discovers that his coveted document has been removed from his possession and Smith must find a way to retrieve it, read it and perhaps better his life because of it.  Let the dangerous, evil adventures begin!

The book has  many twists and turns that will keep you up late at night and keep you turning those pages cheering on Smith right up until the very last one  The plot is excellent, the characters very believable and the world Garfield paints is spot on for that time period.  This book is a perfect read for both children and adults.  It is recommended for kids ages 9-12+.

Acclaimed author Joan Aiken once said, "It's a fine thing that Leon Garfield's rip-roaring and funny tales should be brought back into circulation for a new generation of readers."  Now her prophecy will come true with the handsome, new edition of Garfield's be love tale,  "Smith: The Story of a Pickpocket."   I totally agree with her and highly, highly recommend this book to my readers.

Read on and read always!  If you get a copy and read it I would appreciate your feedback.  Ready to receive your replies.  Have an awesome day everyone.