Not My Girl - a book review 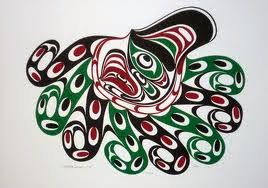 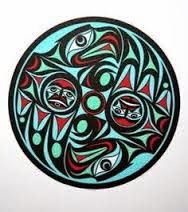 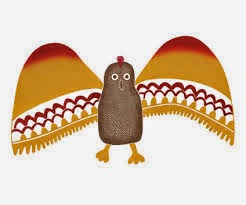 There is irony in the fact that the civilization, which is disrupting the old Inuit culture, also provides the technology, which is the only means of preserving it -- on film. Almost every single person in the Arctic today seems to be a "camera nut". This poem by Ipellie captures some of the feelings that old photographs evoke.
I saw a picture today, in the pages of a book.
It spoke of many memories of when I was still a child:
Snow covered the ground,
And the rocky hills were cold and gray with frost.
The sun was shining from the west,
And the shadows were dark against the whiteness of the
hardened snow.
My body felt a chill
Looking at two Inuit boys playing with their sleigh,
For the fur of their hoods was frosted under their chins,
From their breathing.
In the distance, I could see at least three dog teams going away,
But I didn't know where they were going,
For it was only a photo.
I thought to myself that they were probably going hunting,
To where they would surely find some seals basking on the ice.
Seeing these things made me feel good inside,
And I was happy that I could still see the hidden beauty of the
land,
And know the feeling of silence. 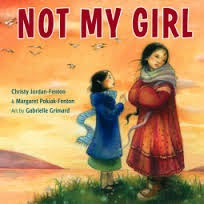 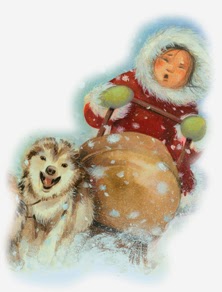 Ten year old Margaret is on a boat eagerly coming home to reunite with her family.  She has been away for a long, lonely two years in an outsider school and she can't wait to see her family and friends again in her native village of Aklavik.  On her arrival she jumps off the boat and meets a mother who is standing as still as a statue. Margaret's heart nearly stops when she hears her mother say?"That's not my girl."  You see Margaret's hair has been shorn, and she is very thin and emaciated looking very unlike the happy, healthy girl that had left her home two years before.  Margaret is shocked by her mother's words and turns away with her eyes full of tears. "Not my girl!" rang out again like the slap of a ruler on a desk." She tenses to run but finds her broken self being caught up in her father's warm embrace.  He tenderly calls her by her native name, Olemaun and then to her delight she feels her mother's arms around her too....giving her the assurance she is welcome back to her home and her family.

The assimilation is very, very hard.  She has forgotten her own language and finds her mother's food unappealing.  She has trouble with the daily skills and the tasks she is to perform to help out her family.  Her best friend is forbidden to play with her because she attended the outside school.  Even the family dogs snarl at her and repel her because she has lost her familiar scent.  She finds solace only in the books that she can now read and the manners she has adapted.  Finally, her dad, full of love and wisdom, gives her the key to once again being accepted and able to live not as an outsider any more, but as an insider once again.

This book is a true biography and the painted illustrations are beautiful to behold.  The colour pallet is rich and portrays perfectly the dramatic scenery of northern Canada, especially the  spectacular sky colours of the aurora borealis.

This is a heartwarming book of acceptance and the vital importance of family relationships. Kinships so strong that the bonds established go on from generation to generation.  I highly recommend this book.

This book is the sequel to "When I Was Eight." Both books will move your heart. 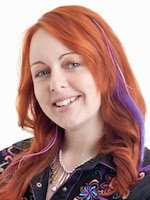 Christy Jordan-Fenton spent her early years on a farm near Rimbey, Alberta. It was common for her to find lambs, calves, and foals in the bathroom on early spring mornings. Brandings, cattle drives, and rodeos were regularly attended events. She moved with her mother and younger brother to Red Deer at the age of seven, and later to Sylvan Lake. Her favorite activities were (and still are) camping and dancing, and she has always loved horses and the mountains.
As a teenager, Christy moved to Orono, Ontario, to live with her aunt and uncle. She attended a rural high school with a population of five hundred students collected from six different communities. Her greatest accomplishments were composing volumes of poetry during math classes, and secretly reading nearly every book by Mordecai Richler during lectures.
Christy joined the infantry reserve in her final semester of high school and spent the next few years travelling from base to base. She was then accepted to Norwich University (VT) in the Corps of Cadets to study Peace, War and Diplomacy. While there, she was part of the Mountain Cold Weather Special Operations Company, played rugby, and often road crazy carpets down the school’s ski hill.
Christy was awarded a Rotary Ambassadorial Scholarship in her senior year to study at the University of Queensland in Australia. She then returned to the United States where she worked developing a leadership challenge program for disadvantaged youth, and taught wilderness survival; however, unable to shake the travel bug, she left to spend a year in South Africa. Her fondest memories are of reading stories to street children at night.
Western Canada eventually called her home. She travelled across the prairies working in the oil patch and riding bucking horses in the rodeo, before meeting her husband and settling down. They live on a farm outside Fort St. John, British Columbia, which they share with her mother-in-law Margaret (the main character in both Fatty Legs (2010) and A Stranger at Home (2011), three small children, three dogs, a llama, too many rogue rabbits to count, and enough horses to outfit a small town.
A desire to raise her children with a healthy sense of self-esteem rekindled her passion for Native issues. Having a Native step-father and step-siblings gave her an early awareness that she credits for igniting that passion. She is eternally grateful to Margaret for having the courage to share her residential school experiences and for giving her the chance to write abou them in not one, but two, books.
Christy’s work has appeared, or will appear, in Jones Ave, Prairie Fire, and an anthology entitled DiVerseCities 2. She is also a performing cowgirl poet and hopes to continue to tell stories that promote education, understanding, and healing.

Margaret Pokiak-Fenton was born on Holman Island in the Arctic Ocean, en route with her nomadic family to their winter hunting grounds on Banks Island. She spent her early years on Banks Island. Being Inuvialuit, her young childhood was filled with hunting trips by dogsled, and dangerous treks across the Arctic Ocean for supplies, in a schooner known as the North Star. At the age of eight, she travelled to Aklavik, a fur trading settlement founded by her great-grandfather, to attend the Catholic residential school there. Unlike most children, she begged to go to the school, despite the horrific reputation of residential schools. There was nothing she wanted more than to learn how to read.
She later settled in Tuktoyaktuk where her family had relocated. While working for the Hudson’s Bay Company there, she met her future husband Lyle, who was employed on the Dew Line project. She followed him south to Fort St. John. Together they raised eight children.
Margaret is well known for her traditional handmade Inuit crafts and has showcased them at the Northern Arts Festival many times. Most Saturdays she can be found at the local farmer’s market in Fort St. John where she sells her beautifully beaded and adorned crafts and the best bread and bannock in the North Peace.

Read on and read always!  Have a beautiful day!

Posted by Storywraps at 9:24 AM