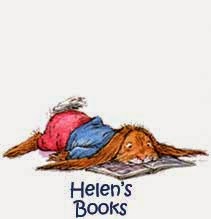 "The greatest gift is a passion for reading."   - Anonymous 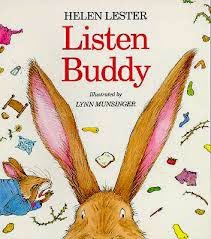 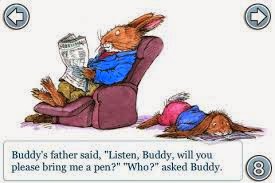 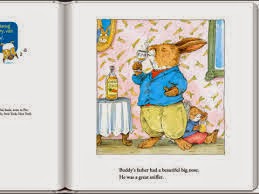 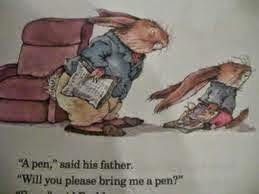 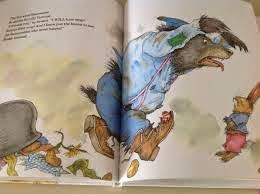 I loved the whole theme of the book.  Listening is very, very important....that is why we have "two" ears and only "mouth."  Listening is an art all onto itself and one sadly we are losing in our culture.  Before we become too critical of our adorable, non-listening main character, Buddy ... remember we all are guilty of such an atrocity.  :)

Buddy was blessed with big beautiful ears. Ears that were soft and velvety and hung down his back but were not tuned in to do what they were designed to do....listen!  When his dad asked him to get a pen he brought his dad a hen.  When his mom asked him to get her a slice of bread, he sawed the bed.   This lazy little guy went through life oblivious of the importance of the wonderful gift he had been given....the gift of not only hearing what people were saying and asking of him but listening and comprehending what the words meant so he could respond appropriately.

One day he was allowed to go on a solo hop, farther than he had ever been allowed to go before.  He was instructed to travel along and soon he would come to two paths.  He was only to choose the left  one because if he chose the right he would run into grave danger. Because of his careless listening skills you can guess which one Little Buddy chose and in so doing got himself into some very hot water indeed...but thankfully not literally.  He quickly learned his lesson of listening carefully and following instructions precisely.  The reader will be happy to know that Little Buddy had an epiphany right then and there and changed his bad listening habits right on the spot.  He recognized the errors and omissions of his ways and made up his mind to listen carefully from that day forth.  And he succeeded.

Lynn Munsinger was born in Greenfield, Massachusetts. She attended Tufts University and graduated in 1974. The following year she enrolled at the Rhode Island School of Design, majoring in illustration. She received her degree in 1977 and continued her studies in London. Since her return to the United States, she has lived in Vermont and Connecticut, devoting her time to freelance illustration. She has illustrated more than a dozen popular books for Houghton Mifflin Company.


Read on and read always!   Have a wonderful day everyone!

Posted by Storywraps at 9:13 AM