Save Rafe! -a book review 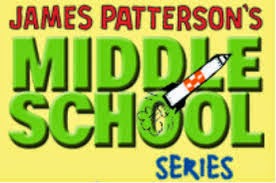 "There are perhaps no days of our childhood we lived so fully as those we spent with a favourite book."
- Marcel Proust 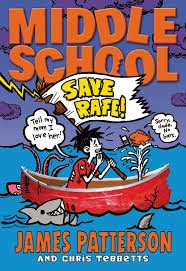 Let's take a peek inside:

Some of the illustrations are from other books in the series....but you get the picture.... :) 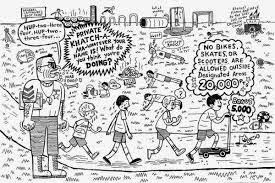 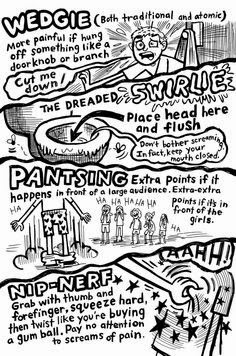 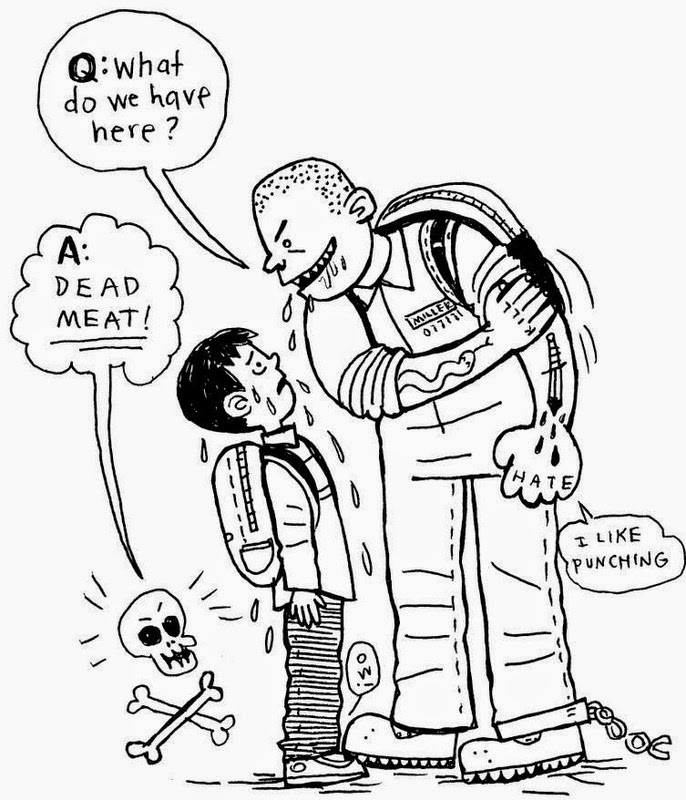 This series of books, targeted at Middle School aged kids, is exemplary.  The language, experiences and friendships of the kids are spot on for this audience.  The illustrations take the text to a whole new level and are jammed-packed full of emotions, action and just loads of fun! I really love them a lot and having taught that grade level for many years know from personal experience that the kids would get a kick out of them too.

"You heard me"! Mom shouted on the other side of the door. "YOU'RE GOING BACK TO HILLS VILLAGE MIDDLE SCHOOL!!!!"

Here begins the new adventure of Rafe Khatchadorian who was terminated from Hills Village Middle and from two other private art schools. Oh my!  Backed into a corner, with no other options before him, he bites the bullet and he and his mom go back to his old school to re-enroll.

This may not be as easy as it seems because the harsh (almost cruel) administrators at HVMS are out to get him.  Their names say it all, Mrs. Stricker and Mrs. Stonecase....now who wouldn't want them running your kid's school?  The only way for Rafe to come back without having to repeat last year's work is for him to successfully complete "The Program."  Now what in the world does that entail ?  It is a bootcamp of sorts which requires perseverance, courage and it is mandatory to complete no matter what.  Rafe knows it is his only hope of getting back into that school and even more importantly not to let his mom down once again.  He accepts the challenge (rather reluctantly at first) and man's up to the tasks ahead of him.

Upon his arrival at the camp he sees a motley crew of kids indeed.  He recognizes  crazy, delinquent, major loser and then there is himself.  His leaders are cold-hearted and authoritative and give no lenience to the pack.  This is what is expected of you, now carry it out and get it done pronto.  No if and or buts accepted.  You fail to show initiative and complete what is set before you...bye bye.

The challenges set before the group require teamwork, trust and successfully completing the task to acquire coveted tokens which ensure you a ticket home.  Failure means being expelled from the program and ensuring that you will spend a minimum of four years back in your middle school.  Will Rafe make the cut and be a success?  As the challenges become more and more difficult can he complete the tasks set before him and earn another token?

Through all these hardships and tough-love scenarios Rafe has an epiphany.  Why in the world would he ever want to mess up his life back home with a warm, dry house to live in,  lovely home cooked meals compliments of mom and of course the fact that she is always there to to help deal with and solve his problems.  He decides then and there to make a life change....one for the better and make everyone proud of him. He realizes he has value and worth and his self-esteem grows inside giving him the knowledge that after completing The Program he will succeed at Hills Village Middle school too.

About the author: James Patterson 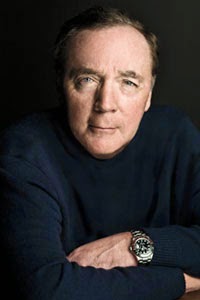 It is no surprise that in January, 2010, The New York Times Magazine featured James Patterson on its cover and hailed him as having "transformed book publishing," and that Time magazine hailed him as "The Man Who Can't Miss." Recently, NBC's Rock Center with Brian Williams profiled Patterson's prolific career, AARP named him one of the "50 Most Influential People Who Make Our Days a Little Brighter," and Variety featured him in a cover story highlighting his adventures in Hollywood.
In 2011, it was estimated that one-in-four of all hardcover suspense/thriller novels sold was written by James Patterson, he is the first author to achieve ten million ebook sales, and he holds the Guinness record for the most #1 New York Times bestsellers of any author. And his success isn't based solely on thrillers like the perennially popular Alex Cross,Women's Murder Club and Michael Bennett series. Patterson is now also the current bestselling author in the young adult and middle grade categories.
He's been called the busiest man in publishing, and that's not just because of his own books. For the past decade, James has been devoting more and more of his time to championing books and reading.
From the James Patterson Pageturner Awards, to hiswebsite ReadKiddoRead.com, to his College Book Bucks scholarships and his regular donations of hundreds of thousands of books to schools here in the states and troops overseas (see interviews on Fox & Friends, The Dennis Miller Radio Show and CNN.com), Patterson has passed on his passion of books and reading and supported those who do the same. Jim personally funded a major ad campaign re-printing a recent opinion piece on CNN.com about how it is our responsibility to get our kids reading. The ad has run in the New York Times, The New Yorker, and USA Today. Those ads are a call to action to parents to make their kids reading a top priority; and were featured by USA Today here. Patterson believes that we cannot rely on schools, teachers or the government to get our kids reading; only parents can make this crucial change in the reading habits of our kids. Here are links to some interviews on his first-ever dual laydown (two books, one for parents and one for kids, in one day): AOL's You've Got, NBC's "Today Show" with Hoda and Kathie Lee, USA Todayand Family Circle, NBC's "Today Show" with Al Roker, as well as an interview with AARP.
James and Miami Heat star Dwyane Wade host a webcast for kids, parents and educators called ONE ON ONE: Fundamentals with Dwyane Wade and James Patterson. In collaboration with NBA Cares, the Wade's World Foundation, ReadKiddoRead and Hachette Book Group, ONE ON ONEhighlights the importance of reading for success in life. The webcast is available free of charge to schools, libraries, and for home viewing via www.JamesPattersonEvents.com.
ReadKiddoRead.com is a website designed to help parents, teachers, and librarians ignite the next generation's excitement about reading by recommending books carefully chosen for their ability to make kids' mouths water—books kids can really sink their teeth into.
The site features: thoughtful book reviews, a lively Facebook community network, messages from James, opportunities to win free books, and contributions from other authors and celebrities who believe in the importance of getting kids excited about reading.
Each year, ReadKiddoRead hosts the Kiddo Awards: the very best books of the year that get kids excited about reading. And, fans of ReadKiddoRead look forward to its annual summer reading list, which releases early May.
James's College Book Bucks program has given out over $170,000 in book shopping sprees over the past three years. High school seniors headed for college answer the question "How has your favorite book inspired you toward what you'd like to do in life?" The best essays are awarded with money towards college texts, for use at Indiebound-affiliated stores of their choosing.
Middle School Book Bucks is a new program, starting in June of 2013. Kids who pledge to read at least four books will be entered to win a book shopping spree at an Indiebound-affiliated bookstore of their choice.

James has donated a box of books to every school in the Palm Beach County, New York City, Savannah, and Los Angeles Unified School Districts—over 400 schools!
He has also donated over 200,000 books to soldiers at home and overseas.

With over $1 million in scholarship money in 2013 alone, the James Patterson Teacher Education Scholarships support up-and-coming teachers who will help give kids the necessary foundation for lifelong reading enjoyment. The Pattersons have established scholarships in education at the following schools:
Additionally, the Pattersons support the A.W. Dreyfoos School of the Arts in West Palm Beach, most recently sponsoring the school's annual holiday prism concert. The school is consistently ranked as one of the highest-performing public schools in the nation and sends more kids on to Juilliard than any other school in the country.
After-school reading programs are also in place at four Palm Beach County middle schools where up to 1,000 books have been donated.

James is Co-chair, World Book Night 2013; He is founding partner with the Duchess of Cornwall of the Children's Reading Fund (UK); and James is Vice Chairman of the Board for WXEL-TV, South Florida's public television station.
Now that's impressive!!
And... Chris Tebbetts

Eventually, I’d had enough of city life. I’m a small town guy at heart, and after eight years, I traded in the Big Apple for the Green Mountains. I’ve loved living here ever since.
This was also when I came back to writing more seriously. They say persistence is key in publishing, and that’s what I had. I took classes, I went to conferences and workshops, and I read, and read, and read. Oh, and of course, I wrote a lot of stuff that never got published. Then one August, at a manuscript workshop, I met a teacher, who knew a guy, who knew an editor in New York, who was looking for someone to write a new four-book fantasy adventure series. (In other words, I also got lucky.) That eventually became The Viking, my first novels, and I’ve been writing ever since.
When I think about everything I’ve always enjoyed doing the most, there’s one thing that holds it all together: storytelling. Whether it was all those stacks of books from the library; the t.v. that I watched way too much of as a kid (I’ll admit it!); the movies I fell in love with; or the process of putting on a play for an audience, it was always about sharing a story. It’s what I love to do, and I hope to continue doing it for a long time.

Book Rating Review:  9   (Close to perfection)
Read on and read always!  Have an amazing day everyone.
Posted by Storywraps at 10:03 AM