Too Hot To Hug - a book review 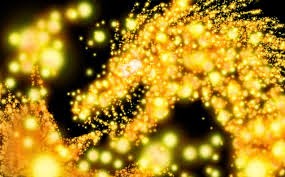 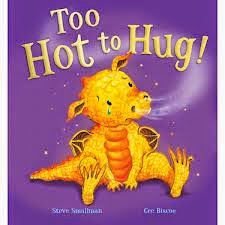 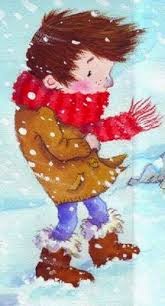 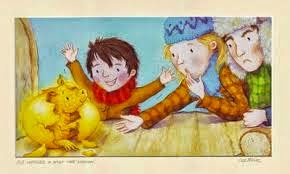 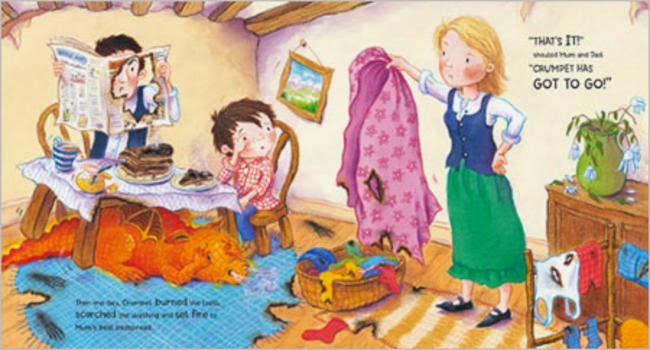 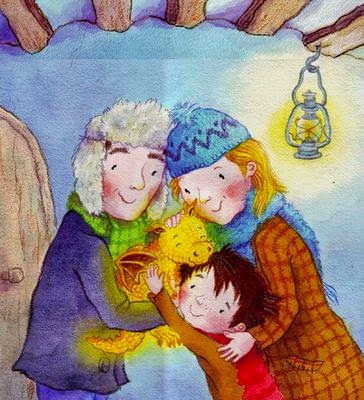 My take on the story:

Let me first say that the illustrations are amazing and bring the text to a whole new level.  Done in acrylics and coloured pencil they are excellent.  This touching, moving and inspiring story centres around a little boy named Rupert who is out in the blistering cold one day, and gets so cold he nearly turns purple and numb.  He stumbles upon a golden egg that is warm to the touch so he scoops it up and brings it home hoping it will bring warmth to his family.  When the egg finally hatches a surprise awaits him.  Inside the egg was developing an adorable fire dragon.  When his parents see what emerges they are horrified because they know that dragons mean trouble.

Rupert names his baby dragon Crumpet.  They bond and become very close friends.  Crumpet is perfect to dry the wash and for hugging when he is small...but as he grows....and he does.....BIG....an even BIGGER problem arises.  As Crumpet evolves so does his heating system.  His thermostat lands on boiling.  He becomes hotter and hotter and cannot control his ever rising temperature.  Because the little dragon does not know how to solve his monumental problem it is left up to his friend Rupert to find a solution.  What is the anti-dote for being all fired-up?  Is there one?  Can Crumpet be a potential danger to everyone around him?  No spoilers from me but I know you will be curious enough to want to get a copy of this book and find out it all comes together in the end.  This is a beautiful, heartwarming tale that shines a spotlight on belonging and acceptance.  Highly recommend by me.

Steve Smallman lives in Staffordshire with his wife, two dogs and two cats. He has four children and a grandchild. Steve has been illustrating children’s books for almost 30 years and writing his own stories for slightly less. He also teaches illustration workshops in schools, including mural-painting. Steve is the author of Smelly Peter the Great Pea Eater(Winner of the Sheffield Children's Book Award 2009) and The Lamb Who Came for Dinner(Shortlisted for the Red House Children's Book Award and read by Meatloaf on CITV's Bookaboo). When he’s not working, Steve enjoys films, television, gardening and walking in the countryside.
Steve Smallman on Steve Smallman:
I started working as an illustrator when I was in my final year at Art College and now, over 28 years later I still haven't got a proper job! I've illustrated literally hundreds of books, predominantly in educational publishing. A few years ago I was main illustrator for Longman's 'Story Street' reading scheme, illustrating 79 titles and writing 5.
I've worked in children's television, specifically in character development and most notably in the 'Raggy Doll' series in the mid to late 1980's. I have also done a certain amount of licensed work, illustrating characters such as Postman Pat, Bill and Ben and Sesame Street.
I've been described as an 'Animal Artist', not I hasten to add because I'm wild and hairy but because I love to draw animals and especially like to give them human characteristics.
I've  been writing children's books for about 6 years and have already had several picture books published with more in development.
I've got 4 great children and although they're all adults now, my memories of them growing up inspire and inform my writing.
About the illustrator: 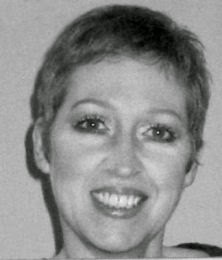 LATEST NEWS:A busy year so far!  Having completed work for Korean and US publishers in the last few months I'm now working on a lovely animal alphabet project for an Australian publisher.

GENERAL
I’m very lucky to have been illustrating picture books full-time since early 2008. My first picture book, commissioned by Little Tiger Press, was  ‘Gruff The Grump’, written by Steve Smallman, which was published in 2009 in the UK, US and 9 other countries. It was one of the 'Reads Of The Year' in the Younger Children category of the Red House Children's Book Awards 2010. Since then I've illustrated 8 more picture books and 6 board books.

The board book, 'Sleepy Me', was selected for inclusion in this year's Bookstart pack and 'Messy Me' - written by the same author, Marni McGee - was shortlisted for Lancashire County Council's Early Years Book Awards 2012.

Previous publications include some novelty books for toddlers for Dorling Kindersley US, French publisher Editions Babiroussa, greetings cards for Two Bad Mice and Ivory Tower, decoupage designs for Craft Creations and various other commissions. My way of working has continued to change and develop, especially after completing an MA in Children's Book Illustration as a mature student at Cambridge School of Art in 2008.

Although children's illustration is now my focus, I've also worked occasionally in a more adult style for a cool little cult magazine called One Eye Grey.

I love music (loads of stuff, though rarely anything very mainstream), language, humour, studying French, daydreams, and my shed where I work, and I'm endlessly fascinated and enthralled by nature, especially birds, which I adore. And bugs. Well, not the ones that make you ill, or the kind that bite you in bed. But creepy crawly ones are fine.

I enjoy life drawing too, which is a great discipline, but for me illustrating picture books has to be the most rewarding of all.

Read on and read always!  Have a beautiful day everyone,
Posted by Storywraps at 10:37 AM