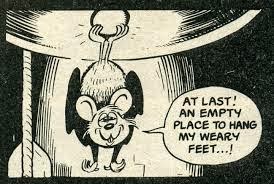 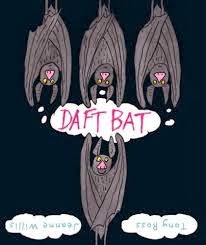 The story begins by the line:  "There was once a bat who got everything round the wrong way".  Why could that be?  Her perspective on life was hanging by her feet and seeing the world in a topsy-turvy way....not a normal way, that could be understood by the other wild, young animal around her.  When she first landed in the neighbourhood Wise Owl wanted to give her a welcome gift. The young animals were asked to go and find out what she would like.  She asked for an umbrella so her feet wouldn't get wet.  What a strange request the kids thought - she's bonkers.  She made references to the "sky below her" and what would happen if the river rose higher and she "got her ears wet," - mad, they concluded.  The only answer that the group could come up with was that she was batty, off her rocker, daft.

The animal kids then tore off to ask Wise Owl for his advice concerning this strange and odd bat.  In his infinite wisdom the old Owl sought bat out and asked her three questions,  "What does a tree look like?'  "What does a mountain look like?"  and the last most important question he posed to the entire group...."Have you ever tried looking at things from Bat's point of view?"  Oh the wisdom of the Owl.  Everyone assumed bat's position (handing upside down in her tree, even the text words joined in the fun) and they looked out on the world just as bat would envision it.  The rains began and the animal kids got bat's message loud and clear.

This innovative book is fun to read and the the upside down text is pure genius.  The illustrations are simple, cartoonish and pack a lot of expression and emotion.  They add an extra element of humour to this delightful engaging picture book.  Perfect read for Hallowe'en.

Jeanne Willis wrote her first book when she was five and hasn't stopped writing since. She has written eighty titles, including picture books, novels and television scripts  She has won numerous awards, including the Children's Book Awards, The Sheffield Children's Book Award and the Silver Smarties Prize.  Her teen novel, Naked Without a Flat, was shortlisted for the Whitbread Award in 2004.  She writes with her pet rat keeping her company and often takes inspirations from dreams and interesting conversations with strangers. 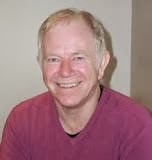 Jeanne Willis wrote her first book when she was five years old and hasn't stopped writing since. She has now written over eighty titles, including picture

Posted by Storywraps at 9:29 AM