Rafa Was My Robot - a book review 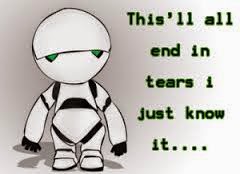 "Literacy is a bridge from misery to hope. "  - Kofi Annan 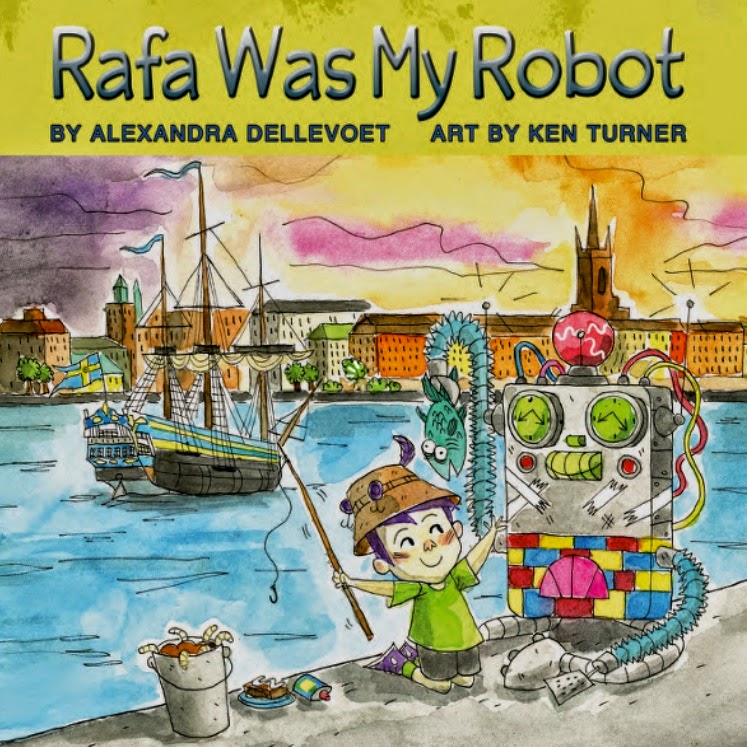 Let's take a look inside shall we?   The illustrations are superb, detailed and enhance the text to the max. 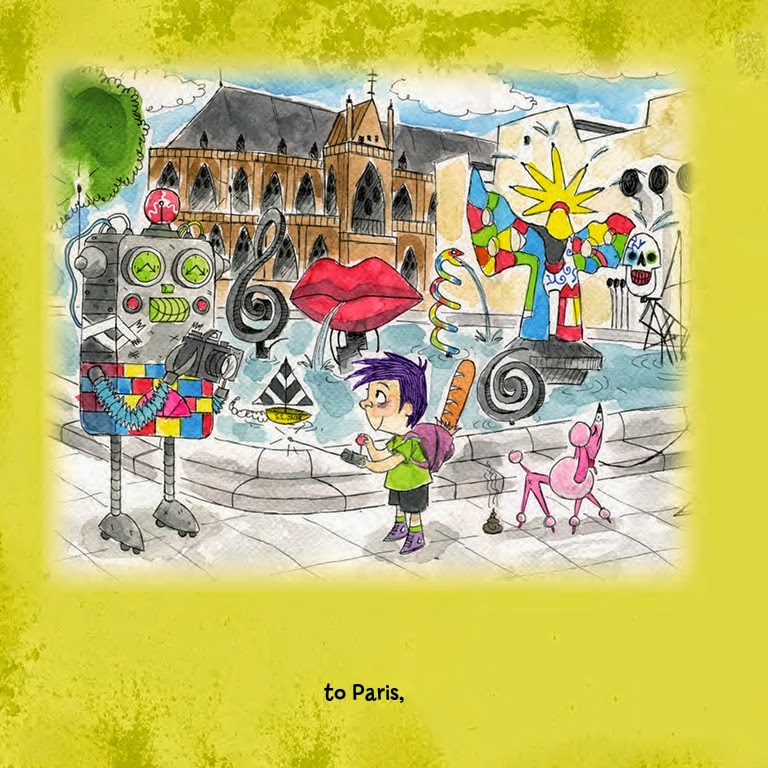 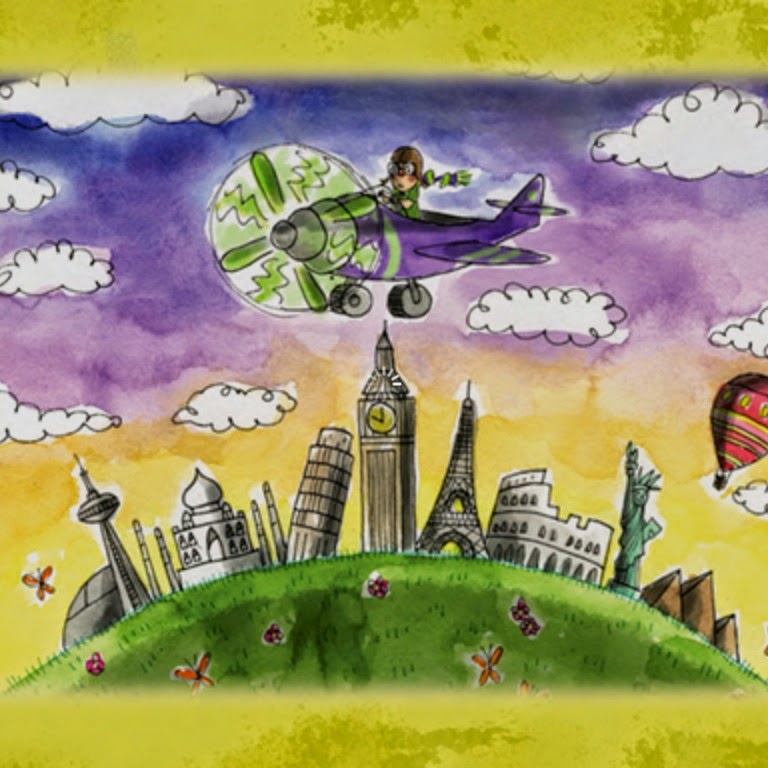 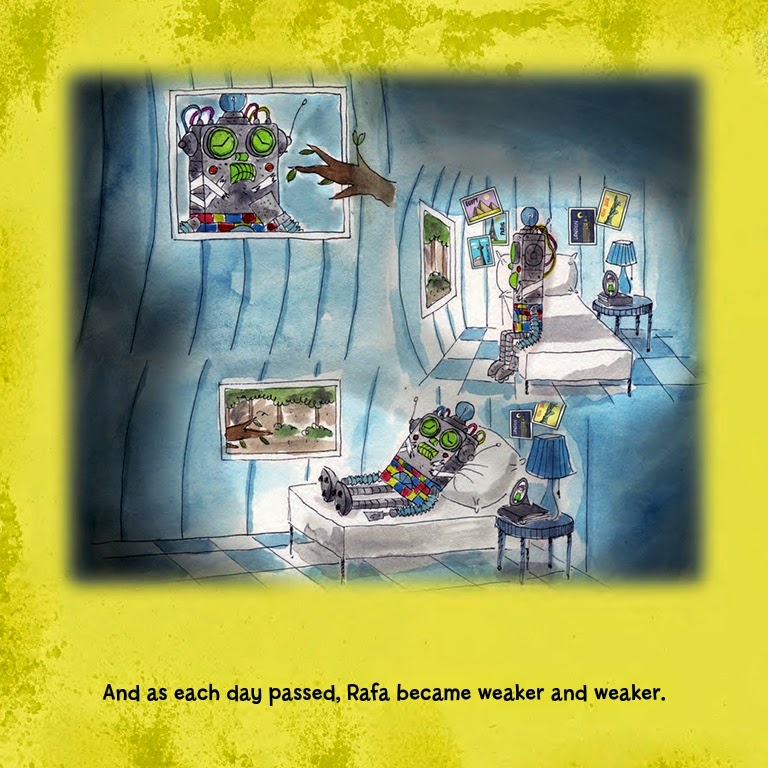 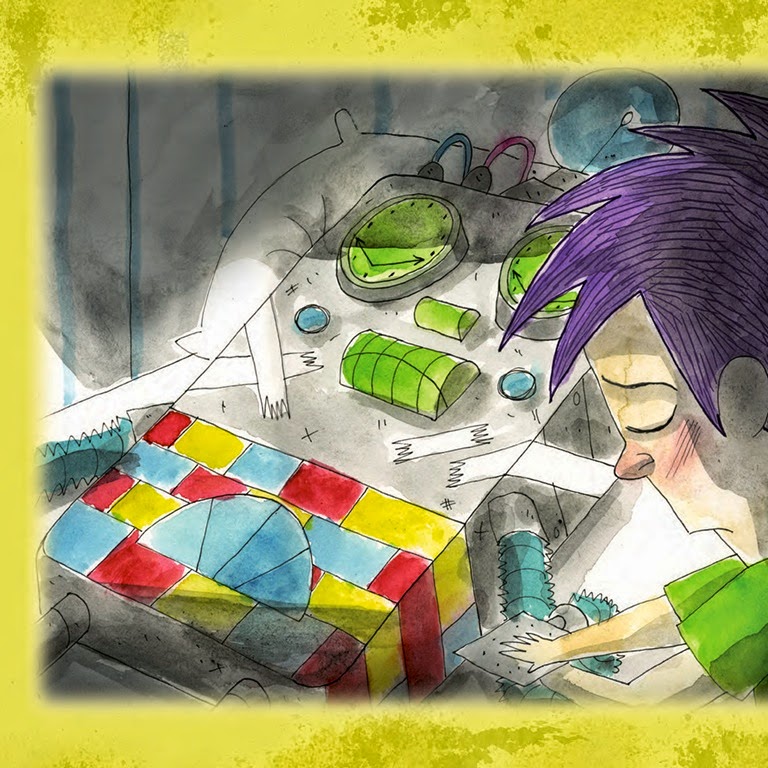 Jacob is a creative, innovative little boy who builds his very own robot from scraps.  They bond immediately becoming inseparable through life experiences.  They swim, attend school and travel the world together even exploring a galaxy far, far away.  Then one day his beloved robot, which he names Rafa, becomes sick and quickly Jacob takes his best friend to a doctor to see what the problem is.  The diagnosis turns out to be a low and diminishing battery.  Jacob, feeling anxious and frightened, travels the world to get a replacement battery so he and his friend can resume their busy and fun-filled life together once again.  Sadly he discovers that Rafa's battery is unique, one of a kind, and cannot be replaced.  In the meantime poor Rafa gets weaker and weaker.  Jacob returns to his friend who is fading away and sits by his bedside holding his hand until Rafa's time runs out. His dear companion's battery light permanently turns off and Jacob knows his friend has passed on.  Jacob is heart broken and floods his world with tears of grief, mourning over the death of his best friend.  Jacob, the creative boy that he is, finds a way to remember his robot forever and in so doing some of the joy and happiness that he shared with Rafa is brought back into his life.

This heartwarming story will open an honest and loving discuss as how to handle your emotions and feelings when someone very close to do you dies.  You can then find solutions and ways to come to terms with the reality of that person (or pet) not coming back to share in your life anymore.  I particularly love the illustrations that are so detailed and packed full of emotions and the hustle and bustle of life.   I highly recommend this book. 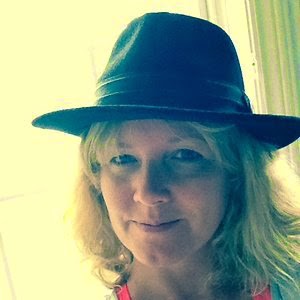 Alex began her career directing commercials and music videos for Mekano Film in Stockholm. Her fresh approach and distinctive flair caught the attention of Canadians in Cannes who encouraged her to return to Toronto. At present Alex shoots primarily in Canada and Mexico. In addition to her directional work, Alex devotes her time to writing children's books and screenplays. Her first children's book, Rafa Was My Robot, is published by Canadian publishing house, Annick Press, and will be launched worldwide this year. In her spare time, Alex volunteers as a hospice worker at a children's hospice in Toronto.

Ken Turner graduated from the BAA Animation program in 2007 at the Sheridan College Institute of Technology and Advanced Learning. He has worked as a character designer, animator, and illustrator for various studios such as Rubicon Publishing, Beehive Illustration, 9 Story Entertainment/Nelvana (My Friend Rabbit, Spliced), Cuppa Coffee Studios (Ugly Americans), Atomic Cartoons (TWT), Oasis Animation (Disney Channel's Lucky Fred), JibJab Media (E-Cards), JEAN Production Company (Promo Short Films), Uncooked Cards (E-Cards), and DHX Media (IG 2.0).
His illustrations and film work have been featured in print and online via the pages of the Toronto Star, Cartoon Brew, DRAWN!, IMDB, SlashFilm, Tim Burton Collective, The Line of Influence: A Tribute to Ronald Searle, Sketchozine, and INSTORE Magazine.
He became interested in animation as a kid watching Saturday morning cartoons and films.  The filmmakers, illustrators, and painters who inspired him were Tim Burton, Steven Spielberg, Edward Gorey, Ronald Searle, Quentin Blake, Dr. Seuss, and Gustav Klimt.
From 2009 to the present, he has published and illustrated humor books including A Night at the Movies, Eye Candy Volume #1: The Village Idioms, Eye Candy Volume #2: Apples & Idioms, a mini-comic entitled The World of Snowboy and Crow, and an illustrated storybook entitled Henry: The Heart Boy, about a boy who quite literally wears his heart on his sleeve. In 2011, he formed his production company Freak Show Studios, a place strange and weird projects could call home.
In June, 2008, his short film Attack of the Giant Vegetable Monsters won Best Online Short in the Animation category award for the MovieHatch - Jackson Hole Film Festival Online Short Film Competition. It was an official selection of the 2008 JHFF festival and awarded the coveted Cowboy Award in Jackson, Wyoming. Attack of the Giant Vegetable Monsters has received over 10,000 plays on Vimeo. In February, 2011, his stop-motion film TiM was an official selection and an animation night selection at the LES (Lower East Side) Film Festival in New York, NY. In February, 2012, TiM screened before the Tim Burton film Sleepy Hollow at the L’étrange soirée de Tim Burton—Convention hommage (The Strange Evening of Tim Burton - Convention Tribute) in Paris, France. TiM has received over 119,000 plays on Vimeo. Attack of the Giant Vegetable Monsters and TiM have been screened at various film festivals around the world.
From April to October 2012, a new animated web series called The World of Snowboy and Crow, based on the mini-comic of the same name, was produced. There were a total of six episodes in the series with voices provided by Andrew Morrow. Currently in production is Series 2 of The World of Snowboy and Crow. On Halloween, 2012, a new animated short film was announced called Henry: The Heart Boy. The new film, based on the illustrated book of the same name, will be completed in 2014 with plans for a film festival tour circuit to follow. In September, 2013, a new web series was completed called SHORT-shorts. The all-new animated series from Freak Show Studios consisted of 13 episodes with each comic-strip-like short featuring new characters in dark but humorous scenarios: “Dark comedic little shorts to brighten your day."
Some words he lives by is a quote by Dr. Seuss from his book Oh, The Places You'll Go:
“You have brains in your head.
You have feet in your shoes.
You can steer yourself any direction you choose.”
He has lived in Toronto, ON, and currently resides in Halifax, NS, Canada.

Read on and read always!  Have an amazing day everyone!

Posted by Storywraps at 9:28 AM