"You Are Magic" - a musicwrap

Listen to the flavour of Alison Faith Levy's music and enjoy!
( *this cut is not from her current album ) 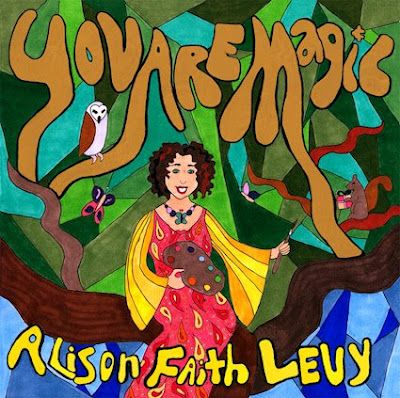 “This San Francisco singer has gone from children’s music to adult music and back again. A former member of the kids’ pop group The Sippy Cups, she detoured into the grown-up duo McCabe & Mrs. Miller before returning to her young fans with the albums World of Wonder and The Start of Things.”

“This glorious recording [“Itsy Bitsy Spider” from World of Wonder] comes forth huge, pounding, with a passionate vocal from Levy, and, from producer Allen Clapp, the most convincing re-creation of Phil Spector’s Wall of Sound anywhere.”

“Employing a musical approach that is best described as powerpop-meets-bubblegum, Levy’s songs rock out in a big way … ‘Like a Spinning Top’ is fetching enough to deserve hit status well outside of the kids’ music box.”

The Heart of the Album 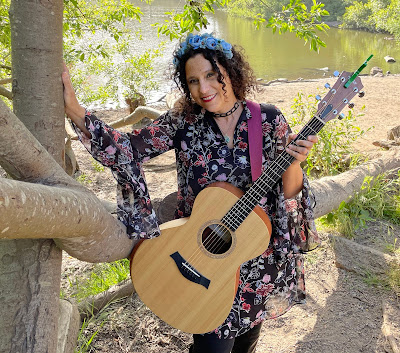 You Are Magic marks a turning point in Alison Faith Levy’s career, her life, and her message. The album is an upbeat collection of colorful, whimsical, retro-inspired pop songs designed to open a spiritual dialogue for young children and families. What are the values we choose to live by, and how do we express them? Who are we, and why are we here? How do we connect with others? Where does creativity come from? How do we connect to the natural world? What can we do to make the world a better place? These universal questions will resonate with families of all backgrounds.

“This is a concept album,” says Alison Faith Levy. “I envision You Are Magic as a tree, starting with ‘Roots & Branches,’ and reaching all the way through ‘Leaves & Sky.’ The overarching theme is that our own creative energy and momentum, which comes to us naturally, is a reflection of the universe. Everyone has something inside of them that contributes to making the world better, more beautiful, more colorful, more compassionate, more sparkly – more awesome. I wanted to tell that to the listener in a very direct way!”

Often compared to Carole King, Alison Faith Levy says, “That works for me! She’s a big influence.”  Alison is inspired by the music of the ‘60s and ‘70s: The Beatles, Elton John, psychedelia, folk rock, the British Invasion, and piano singer-songwriters.

Highlights on You Are Magic include the title track, which, with its joyous ‘60s beat and feel, lays out the key themes of the album: empathy, connectedness, forward motion, and inspiration. “Turn Around” is based on the idea of renewal, seeing all sides, and changing perspectives. “Now Is the Moment,” written during a very tumultuous and difficult time for our country, reminds listeners to consciously stop, breathe, appreciate, and reflect.

Alison Faith Levy wrote “Canopy” on a trip to Big Sur, sitting by the river with her guitar, looking up at the trees at dusk and feeling protected by them. She says, “I also had a great time making the harmonies for this song. I was trying to sound like Crosby, Stills & Nash!” The bluesy number “Putting it Back Together,” featuring Alison’s son Henry Plotnick on piano, uses a metaphor of a 1,000-piece jigsaw puzzle of planet Earth to symbolize the seemingly overwhelming task of repairing our world in a fair and healthy way.

As an original member of the psychedelic rock ‘n’ roll circus for kids that was The Sippy Cups, Alison Faith Levy toured the country many times over, playing such noteworthy festivals and performing arts centers as Symphony Space in NYC, Lollapalooza, House of Blues, Central Park Summerstage, and Austin City Limits. Alison wrote several Sippy Cups songs that became Top Ten hits on SiriusXM’s Kids Place Live. After the band went on an extended hiatus, Alison released two albums of her own original music for families: World of Wonder (2012) and The Start of Things (2015).

Music journalist Paul Myers wrote of World of Wonder, “I only knew singer/keyboardist Alison Faith Levy from her work in more alt-rock settings such as The Loud Family (with Scott Miller) and McCabe & Mrs. Miller (with Camper Van Beethoven's Victor Krummenacher), but in this milieu, we really get to hear her voice, which recalls the great girl group singers like Ronnie Spector. It doesn't hurt that California sunshine pop mastermind Allen Clapp (The Orange Peels) bathes the whole thing in Spectorian reverb.”

Upon releasing her first two solo family albums, Alison formed her Big Time Tot Rock Band and played hundreds of shows for families throughout Northern California. In addition, she developed her own “Big Time Tot Rock” music curriculum for toddlers and preschoolers, which she soon found herself teaching at preschools and community centers all over the San Francisco Bay Area.

After teaching music in Jewish settings for several years, Alison decided that the world of Jewish education was a perfect fit for her and was offered a Legacy Fellowship to pursue her Masters in Jewish Education at Hebrew College in Boston. She graduated with distinction in 2020 and now serves as a Cantorial Soloist and educator at two Bay Area synagogues.

Inspired by her newfound joyful connection with Judaism, Alison began writing a new batch of songs based in Jewish values, incorporating children’s ideas about spirituality. You Are Magic is a collection of these very special musical journeys for families.

In addition to You Are Magic, The Start of Things, and World of Wonder, Alison Faith Levy can be heard on The Sippy Cups’ albums The Time Machine (2009), Electric Storyland (2006), and Kids Rock for Peas (2005). She also appears on the band’s DVD, Electric Storyland Live at the Great American Music Hall (2007). As one half of McCabe & Mrs. Miller, she is heard on Time for Leaving (2009). Earlier in her career, Alison released two solo albums for adults and recorded two albums as a member of The Loud Family.

Alison is married to Danny Plotnick, Director of Film Studies at the University of San Francisco and author of Super 8: An Illustrated History. Their son, Henry Plotnick, is a Jazz Piano major at The New School in New York City.

🎶🎶🎶🎶🎶
Marilyn here...
Happy Saturday everyone (and weekend).  Enjoy your family and friends and be sure to take some time to relax and read your favourite books.  Maybe sometime soon you can schedule your kids for a Saturday library visit and get them their very own  library cards. Kids feel so important and grown-up with a card that they can use at check-out time.  Then they can browse, choose and sign out books of their own choice to devour in the upcoming week.  The library offers great movies, CDs, tons of books and fabulous programmes free of charge. Pay homage to  your local library where thousands of delighful books are housed. Join me back here on Storywraps on Monday. Everyone is welcome! Take care and stay safe. Follow me at:

Posted by Storywraps at 7:36 AM